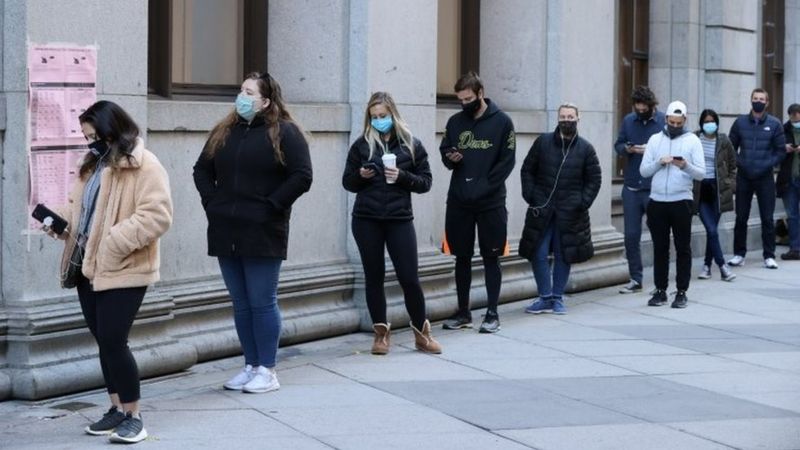 People queued early in the morning to cast their ballots at polling stations in Philadelphia, Pennsylvania
Spread This News

AMERICANS are voting in one of the most divisive presidential polls in decades, pitting incumbent Republican Donald Trump against Democrat Joe Biden.

Polls have opened in the east of the country after a long and bitter campaign amid the coronavirus pandemic.

Nearly 100 million people have already cast their ballots in early voting, putting the country on course for its highest turnout in a century.

Both rivals spent the final hours of the race rallying in key swing states.

National polls give a firm lead to Mr Biden, but it is a closer race in the states that could decide the outcome.

In the US election, voters decide state-level contests rather than an overall single national one.

Among the first swing states to begin election-day voting on Tuesday were the key battlegrounds of North Carolina and Ohio (11:30 GMT), followed half an hour later by Florida, Pennsylvania, Georgia, Michigan and Wisconsin. Arizona – another closely-contested state – followed at 13:00 GMT.

To be elected president, a candidate must win at least 270 votes in what is called the electoral college. Each US state gets a certain number of votes partly based on its population and there are a total of 538 up for grabs.

This system explains why it is possible for a candidate to win the most votes nationally – as Hillary Clinton did in 2016 – but still lose the election.

Control of the Senate is also at stake in these elections, with the Democrats seeking to gain control of both houses of Congress and the White House for the first time since early in Barack Obama’s first term.

The coronavirus pandemic has at times overshadowed the election campaign, with the epidemic in the US worsening over the final weeks of the race. The country has recorded more cases and more deaths than anywhere else in the world, and fear of infection has contributed to an unprecedented surge in early and postal voting.

There are fears that pockets of post-election violence could break out as the results come in.

A new “non-scalable” fence has been put up around the White House in Washington DC.

On Tuesday morning, Mr Trump told Fox News during a phone interview he felt good about his chances of victory, predicting he would win “big” in key states such as Florida and Arizona.

“I think we have a really solid chance of winning,” he said.

Some commentators noted Mr Trump sounded hoarse and tired during the interview after a late night rally in Michigan.

Where did Biden and Trump campaign in the final hours?

With stops in North Carolina, Pennsylvania, Michigan and Wisconsin, he talked up his economic record and prospects for victory, while talking down the polls and the media, and mocking his opponent.

“We are going to gain four more years in this very beautiful White House,” he told supporters at his final rally in Grand Rapids, Michigan, the same industrial city where he ended the 2016 election race.

Both candidates made appearances in Pennsylvania, one of the most crucial states in the race and where the contest remains extremely tight.

President Trump headed to Scranton, the city where his opponent lived until he was 10. At a rally there he reminded his supporters that he won the state in 2016, despite polls suggesting he would lose.

In Ohio, Mr Biden repeated the core message of his campaign, telling voters that the race was about the soul of America. He said it was time for Mr Trump to “pack his bags”, saying “we’re done with the tweets, the anger, the hate, the failure, the irresponsibility”.

In the last hours of the campaign, Twitter and Facebook labelled a post by President Trump as “misleading”, after he claimed that postal ballots in Pennsylvania could lead to rampant fraud. The social media giants also added a link to a website explaining why mail-in votes were safe.

It came after the US Supreme Court ruled that Pennsylvania could count postal ballots received three days after the election.

Mr Trump and his campaign have indicated they will sue to block the move.

Legal fights over ballots have also been unfolding in Minnesota, North Carolina and Texas.

When will we get a result?

It can take several days for every vote to be counted after any US presidential election, but it is usually pretty clear who the winner is by the early hours of the following morning.

In 2016, Donald Trump took to the stage in New York at about 03:00 local time to give his victory speech in front of a crowd of jubilant supporters.

But do not set your alarm clocks just yet. Officials are already warning that we may have to wait longer – possibly days, even weeks – for the result this year because of the expected surge in postal ballots.

The last time the result was not clear within a few hours was in 2000, when the winner, George W Bush, was not confirmed until a Supreme Court ruling was made a month later.

The president is to host an election night party inside the White House with about 400 guests invited.

Up to 10,000 protesters are expected to gather on election night at the renamed Black Lives Matter Plaza and a park in Downtown Washington DC, not far from the White House, according to CBS News.

Mr Biden and Ms Harris will watch the election night returns in the former vice-president’s hometown of Wilmington, Delaware.

Different states have different rules for how – and when – to count postal ballots, meaning there will be large gaps between them in terms of reporting results. In some states it will take weeks to get complete results.

On Sunday, a report by news site Axios said Mr Trump would declare victory on Tuesday night if it looked as if he was ahead.

The two rivals have radically different policies on several key issues. They have clashed bitterly over Covid-19 during the campaign, with Mr Trump accusing his rival of wanting to shut down the country and the economy, and asserting, without the backing of his top scientists, that the US is “rounding the turn” on the virus.

Mr Biden, for his part, has insisted that he will follow “the science” and accuses the president of a haphazard response to the pandemic that has needlessly cost too many lives.