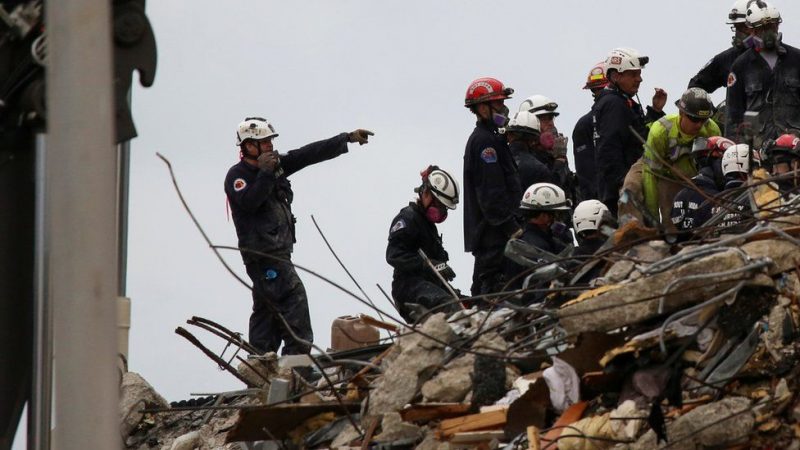 A FIREFIGHTER has carried the body of his own seven-year-old daughter from the rubble of the apartment block that collapsed near Miami last week.

He had kept vigil at the site for nine days and was there when she was extracted from the ruins.

Stella Cattarossi was one of two more victims pulled from the wreckage on Friday, taking the death toll to 22, with 126 people still missing.

Residents of another block have been told to leave on safety grounds.

Officials are investigating many of the local tower blocks for structural faults following the partial collapse of the Champlain Towers South condominium in Surfside on 24 June.

An engineer report from January states that Crestview is “not structurally nor electrically safe for continued occupancy”, local TV outlet Miami Seven reports.

Crews continue to scour the wreckage of the 12-storey Champlain Towers South for survivors, despite the risk of falling debris and an incoming hurricane.

Stella Cattarossi is the third child to be recovered from the site in the Miami suburb of Surfside.

She was with her mother, grandparents and an aunt visiting from Argentina, according to loca10.com.

“When he was made aware that we were close to where his loved one may have been, then he stood side by side with some of his other fellow firefighters,” Miami Fire Rescue Capt Ignatius Carroll told WPLG.

“We were able to bring her and then at least give him an opportunity to say his farewells.”

Stella’s father used his jacket to cover his daughter’s body, placed a small US flag over her and carried her out of the area.

The other body found has not yet been publicly identified.

On Friday, the mayor of Miami-Dade County ordered the demolition of the remaining structure of Champlain Towers South, amid fears it could collapse on rescue crews below.

The bodies of two sisters, Lucia Guara, 4, and Emma Guara, 10, were found on Wednesday.

No-one has been pulled alive since the first hours after the Champlain Towers South apartment block caved in on itself in the early hours of 24 July as residents slept.

Rescuers are keen to make progress before the arrival of Storm Elsa, a 75-mph (120kmh) hurricane that could potentially hit Florida next week.

What caused the 40-year-old building to crumble remains unclear. But a 2018 inspection warned of “major” design flaws in the original design.

The building association’s board says it will appoint an “independent receiver… to oversee the legal and claims process”.