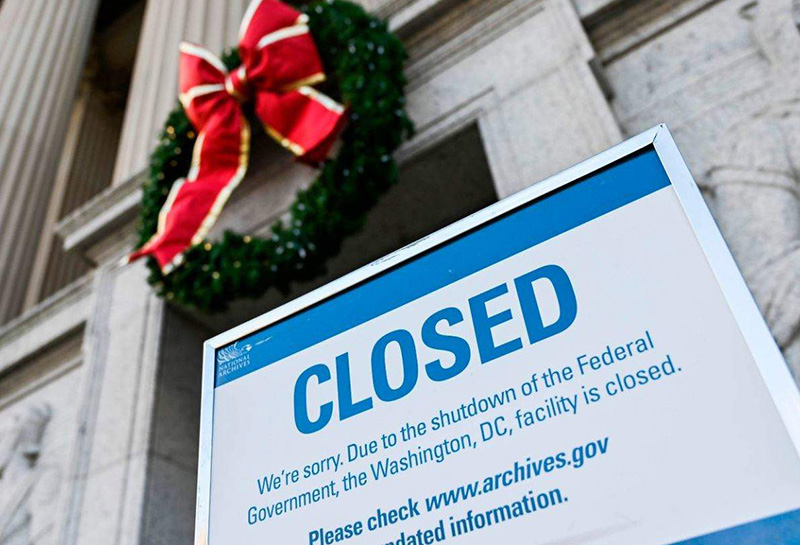 A partial US government shutdown that entered its second day on Sunday was set to stretch through Christmas, after Congress adjourned for the weekend with no deal in sight to end an impasse over funding for President Donald Trump’s wall on the US-Mexico border.

Due to the shutdown — in which several key US agencies ceased operations at 12:01 am (0501 GMT) Saturday — Trump said he would remain in Washington over Christmas instead of going to Florida.

“I am in the White House, working hard,” the Republican president tweeted. “We are negotiating with the Democrats on desperately needed Border Security (Gangs, Drugs, Human Trafficking & more) but it could be a long stay.”

Trump has dug in on his demand for $5 billion for construction of the border wall, a signature campaign promise and part of his effort to reduce illegal immigration. Democrats are staunchly opposed, and the absence of a deal meant federal funds for dozens of agencies lapsed at midnight Friday.

The House of Representatives and the Senate held sessions on Saturday, but both chambers adjourned without agreement, and no votes were expected until Thursday.

Transportation Security Administration (TSA) officers work unpaid on the first day of the US government shutdown, at LAX Airport in Los Angeles

Visitors to the capital’s park-like National Mall, home to attractions including war memorials and the towering Washington Monument, criticised the shutdown which added to an air of chaos in a capital still reeling from Defence Secretary Jim Mattis’s resignation last week over Trump policies.

The uncertainty also helped pushed Wall Street into another rout on Friday, ending its worst week in a decade.

Jeffrey Grignon, a Wisconsin healthcare worker, said the politicians “need to stop acting like children” and do the work they were elected to do.

Another visitor, Howard Vander Griend, 57, predicted Trump will come out a winner from the budget impasse.

“I don’t think the shutdown will pressure president Trump at all,” said Vander Griend, of Tennessee. “So I think he will get what he wants and I think that’s a good thing.”

The Lincoln Memorial in Washington was among sites, along with Smithsonian museums, that remained accessible despite a partial US government shutdown

Although tourists could still stroll along the Mall and visit its open-air sites, they found public restrooms closed. Some other Washington tourist sites including the White House Visitor Center, National Christmas Tree, and National Archives — home to the US Constitution and other historic documents — were closed.

Some national parks have shuttered completely, but New York’s governor provided funding to the Statue of Liberty monument and Ellis Island so those attractions could remain open.

This is the third partial government shutdown of the year, even though Trump’s own Republican party still controls both the House and Senate.

That will change in January when the House comes under Democratic control.

“The Trump shutdown isn’t over border security; it’s because President Trump is demanding billions of dollars for an expensive, ineffective wall that the majority of Americans don’t support,” Schumer said.

Most critical US security functions remain operational, but 800,000 federal workers are affected, with many furloughed before Christmas. Others deemed essential, including Transportation Security Administration officers screening passengers during the holiday crush, are working unpaid.

Governor Ralph Northam of Virginia — a state bordering the US capital that is home to many federal employees — urged Trump in a letter Saturday to push immediate action to end the shutdown, saying it “inflicts real harm” on workers.

“I share your desire for strong economic growth throughout the United States, but the current partial government shutdown makes it harder to achieve this goal,” the Democratic governor said.

About three-quarters of the government, including the military and the Department of Health and Human Services, is fully funded until the end of September 2019, leaving 25 percent unfunded as of Saturday.

One focus of last-minute discussions was $1.6 billion in border security support that was a part of pending Senate legislation, number two Senate Republican John Cornyn told AFP. Conservatives in the House would likely balk at that figure.

Trump had reversed course Thursday and rejected a measure that had unanimously passed the Senate and was under House consideration. It would have extended government funding until February 8 to allow time for debate about issues including border security, but it contained no money for a wall.

With ultra-conservative lawmakers and media commentators demanding that the president stick to his campaign promises, Trump stood his ground on the wall.

The House then swiftly passed a bill that fulfilled the president’s demands and included $5.7 billion in wall funding, but it stalled at the first hurdle in the Senate.