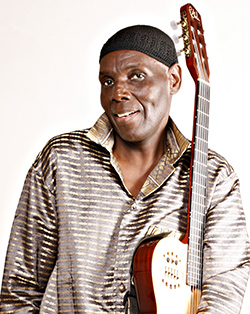 AN American non-profit group, Cultures in Harmony (CiH), is in the country to foster partnerships that will to benefit Zimbabweans as well as produce the first-ever symphony orchestra performance of Oliver Mtukudzi.
The visit is an anniversary project dubbed Passacaglia which is aimed at taking skills to six countries which the group has already worked in during its 10-year existence.
CiH founder and executive director William Harvey said compositions for Mtukudzi’s songs which will be performed at the Music Camp Orchestra scheduled for next week in Harare have since started.
“We are here to affirm the common ties between Zimbabweans and Americans through the universal language of music,” said Harvey in an interview with NewZimbabwe.com on Wednesday.
“For our anniversary, we are travelling to six countries which we have worked in to create compositions with youths and local musicians on the basis of four discerning notes which symbolises what people from all cultures share and the different variations symbolises the different cultures we celebrate.”
He added: “Next week we go to Music Camp Orchestra where we will be teaching and performing on August 28th at St Georges Chapel …
“ …  and for the first time in history, a symphony orchestra will play Zimbabwean music, specifically the music of Oliver Mtukudzi, who will join us himself to sing three of his most popular songs with an 80 piece orchestra.
According to Harvey, on August 29 and 30, the group will play with renowned pianist Sekai Zengeza at Arundel Chapel.
They will also play at a benefit concert where all proceeds will go towards funding Eyes for Africa which founded by Zimbabwe’s renowned eye specialist Solomon Guramatunhu.
Bahamas, Pakistani, Turkey, Tunisia and Egypt are the other countries which have benefitted from CiH’s anniversary project.Advertisement