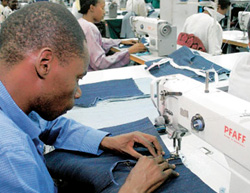 ZIMBABWE’s textile industry needs to explore the lucrative United States market as it bids to recover its former lustre, a US trade specialist has said.
Trade between Zimbabwe and the US has declined in recent years, with local exports to America totalling $34 million in 2013 compared to $91 million in 2001. The country imported $60 million worth of goods from the US in the comparative period, up from $31 million.
Zimbabwe imports mainly machinery, pharmaceutical products, vehicles and medical instruments and exports iron and steel, tobacco, coffee, raw hides and skins.
Notably, Zimbabwe is not eligible under the African Growth and Opportunity Act (AGOA), which offers qualifying sub-Saharan countries even more liberal access to the US market after Washington imposed sanctions on President Robert Mugabe and his inner circle in 2003 on allegations of human rights abuses.
AGOA is the main vehicle for dialogue between the US and sub-Sahara Africa, but its lifespan ends this year.
Last week, US senior commercial specialist Robert Telchin told The Source after addressing a business seminar on US-Zimbabwe trade opportunities that local textile manufacturers could penetrate the US market, but needed to produce good quality products.
“United States has a high demand of textile products and the markets also demand high quality products. The country (Zimbabwe) can export its textile products if their products meet the United States’ standards,” said Telchin.
He also urged government to prioritise infrastructure to counter attack economic growth barriers.
“The great deals begin from a vibrant entrepreneurship in informal sector and in terms of larger scale, the country needs to develop the formal economy – things like infrastructure. Transport and energy infrastructure are the things government need to take lead on and play a big role,” he said.
“The most important thing to note is that capital investment flows to the places where it’s easy to empower businesses, with policies in place allowing businesses to thrive; and infrastructure is the key element in all this.”Advertisement