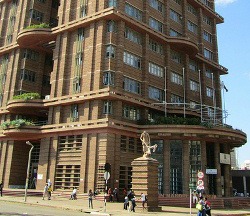 THE United States government said Wednesday it had removed sanctions against the state-owned Agricultural Development Bank of Zimbabwe and the Infrastructure Development Bank of Zimbabwe.
The banks were among institutions and individuals slapped with sanctions by the US more than a decade ago over allegations of electoral fraud and human rights abuses.
On Wednesday the U.S. Treasury Department’s Office of Foreign Assets Control issued a licence that authorises transactions with the two banks “provided they don’t involve someone under U.S. sanctions”.
The US said the development was part of an “action for action” response to encourage continuing political progress after the country organised a referendum on a new constitution with fresh elections expected later in the year.
“Our sanctions program reflects a continuing commitment to help the people of Zimbabwe restore the stable, peaceful, democratic country they rightly deserve,” the State Department official said.
“We are prepared to consider further rolling back our sanctions on Zimbabwe in response to positive progress on Zimbabwe’s part in meeting its reform commitments.
The move comes after the European Union (EU) also suspended its own sanctions, offering to remove them completely if the country organise credible new elections.
Zimbabwe has however rejected conditional easing of the sanctions which President Robert Mugabe and his Zanu PF party say are illegal and responsible for the country’s economic problems.Advertisement