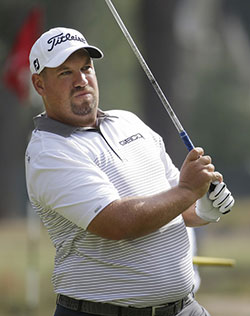 BRENDON de Jonge heard the “Go Hokies!” call from a fan as he headed for the clubhouse at Pinehurst No. 2, and a smile spread across his round face.
De Jonge, who was born in Zimbabwe and lives in North Carolina, was a college golf All-America selection in 2002 and 2003 at football-crazy Virginia Tech.
He will head into Saturday’s third round of the U.S. Open needing a touchdown and a two-point conversion to catch leader Martin Kaymer.
“I didn’t see 10-under out there. Nobody expected that,” de Jonge said of Kaymer’s back-to-back 65s.
“Maybe 10-over par was more what we were looking at during the practice rounds. It’s just incredible.”
De Jonge strung together two good rounds of his own, shooting 68 and 70 to get to 2 under. And yet, Kaymer has run and hid from the field.
“I don’t think ‘demoralizing’ is the word,” de Jonge said. “I’m under par through two rounds at the U.S. Open. I’m very, very happy with that.”
It’s a step in the right direction.

De Jonge, 33, finished tied for sixth place at the Wells Fargo Championship at Quail Hollow, his home course in Charlotte. It’s his only top-10 finish in 20 PGA Tour starts this year.
But he heads into the weekend at the U.S. Open among a select group of players under par on architect Donald Ross’ masterpiece, Pinehurst No. 2.
De Jonge made three birdies and three bogeys in his even-par round Friday morning — a little disappointing considering how much overnight rain had softened the course for players with morning tee times.
“We had almost three-quarters of an inch last night, and it softened things up,” de Jonge said. “But it also meant you had to hit some longer clubs into these greens, which is tough. They had some really difficult flags out there.”
With Kaymer way out in front, De Jonge is hoping the course dries out, firms up and plays tougher during the weekend rounds.
It sounds counter-intuitive. But it might be the only way to catch Kaymer.
“If you’re driving the ball really well, you want firm greens out there when you’re chasing (the leader),” de Jonge said.
“It’s a very, very difficult golf course, I would say, to play overprotective on. Especially once it gets firm and fast.”Advertisement