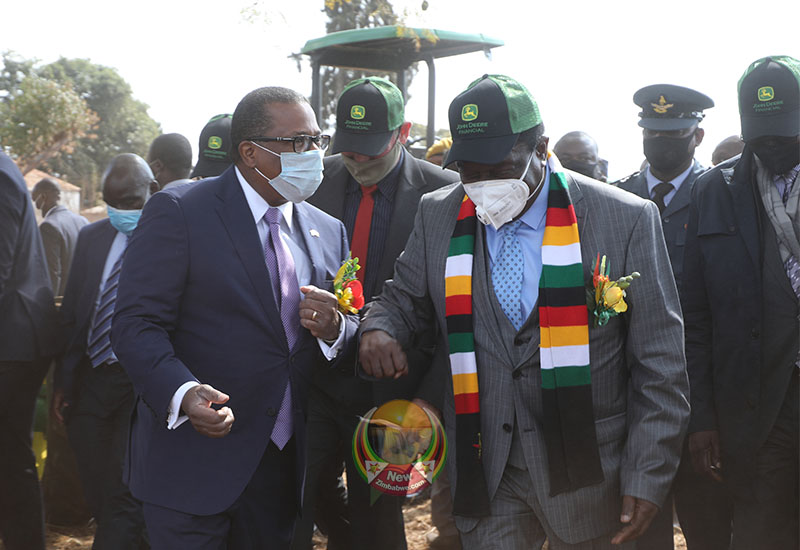 May I borrow your scarf...US ambassador Brian Nichols seems to be saying to President Mnangagwa during ceremony
Spread This News

THE United States of America has pledged to continue investing in Zimbabwe even after it has adamantly kept targeted sanctions on the country’s ruling elite over alleged human rights abuses and poll theft.

Over the years, America has maintained sanctions imposed on the troubled country since 2003 insisting the new government’s policies continued to pose an “unusual and extraordinary” threat to American foreign policy.

Speaking during the commissioning of the John Deere Mechanisation Facility at the Institute of Agricultural Engineering in Harare by President Emmerson Mnangagwa on Thursday, United States Ambassador Brian Nichols said his country will still have more investors in Zimbabwe despite the diplomatic differences.

“We hope there will be more private sector led growth in Zimbabwe and will continue to be strengthened.

“I hope that this will combine with our aid programmes like USAID which have a 20-million-dollar programme which is a five year programme that will support small farmers in Zimbabwe.”

John Deere local representative, Graeme Smith said his company was committed to working with the Zimbabwean government to ensure food security through the provision of farm equipment.

“More equipment is on its way and will be assembled at the Institute of Agriculture Engineering where training will be conducted to prospective farmers,” said Smith.

Mnangagwa, in his speech, said agriculture was the only way Zimbabwe could get out of poverty and was a precondition for economic growth and prosperity.

“As such, agriculture is a sure pathway out of poverty and a precondition for economic growth and prosperity of our country,” said Mnangagwa.

My government has made agriculture transformation and the attainment of food self-sufficiency one of its key priorities hence the launch of this facility is timely and part of the journey embarked on towards the realisation of these objectives.

The deal has long been touted as a milestone to farm mechanisation in Zimbabwe, with a private financier CBZ Bank being identified by the government to ensure its sustainability.

At least 5 000 farmers selected under the National Agricultural Recovery Plan are set to benefit from the scheme.