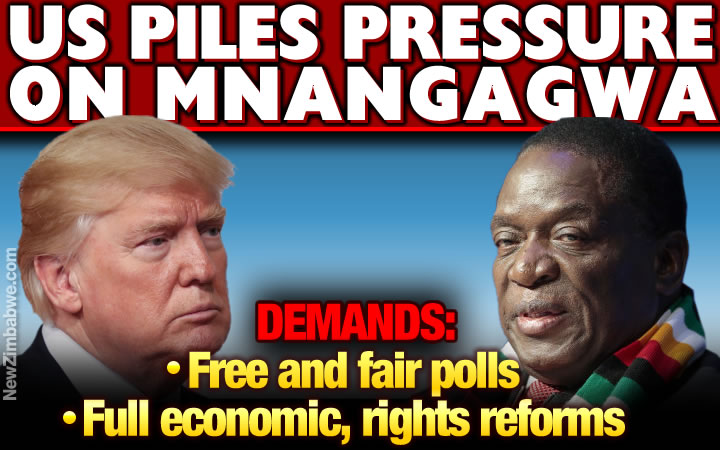 THE Trump administration is waiting for the fulfilment of reform promises made by President Emmerson Mnangagwa before it can put a seal of approval on his government, said United States of America charge D’affaires to Zimbabwe Jennifer Savage.

Savage said this to the press after paying a courtesy call on speaker of Parliament Jacob Mudenda this Tuesday.

She said her government was expecting more than just delivering a credible election to human and economic reforms for bilateral ties to improve between the two countries.

“We do talk about that what we are looking for is not just elections, elections are an important step but we are looking to a number of pillars, economic reforms, rights reforms and good governance reforms as well as those free, fair and transparent elections. We are hearing the rights words and we need to see some action on those promises made.”

With former president Robert Mugabe out of the way, Mnangagwa as the successor has been speaking social, economic and political reforms.

He has invested a lot into international reengagement following decades of isolation.

The country is set to hold general elections in the next few months and Mnangangwa has reiterated his commitment to ensuring the outcome is uncontested, observed and monitored by the international community.

“We had discussions on the state and progress of electoral law and reforms. I have been hearing that the law is progressing. We look forward to the outcomes. We look forward to having further conversations about economic reforms, the rights front and the governance front,” she said.