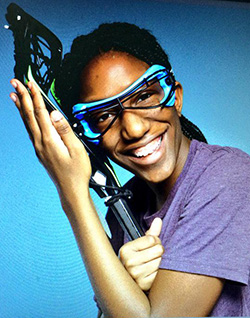 (This article was originally published by Lacrosse Magazine)
TARIRO Kandemiri was in love.
Like any high school freshman, she wanted to shout it from the rooftops — or her phone. And like any social circle surrounding a love-struck teen, Kandemiri’s friends found it all a little annoying. They told her to quit clogging their feeds.
But they didn’t get it. This was no schoolgirl crush. Kandemiri needed the world to know about her great love. She created a separate Twitter account. Official Lax Girl, or @officiallaxgirl, was born.
Today Kandemiri is known — and, yes, loved — by more than 13,600 Twitter followers, almost as many as lacrosse superstar Rob Pannell, who follows her and wished her a happy birthday. She’s a source of inspiration, humour, encouragement and adorable animal pictures that Kandemiri somehow relate to lacrosse.
But who is the girl behind the Official Lax Girl?
Kandemiri is a freshman at Sewanee, a Division III university in Tennessee. She’s there on a scholarship, but not a lacrosse scholarship.
Official Lax Girl is a digital manifestation of her pure, unchanged personality. She never played lacrosse until high school. She did not even step foot on American soil until she was 8.
Kandemiri was born and raised in Harare. She occasionally visited older relatives in the villages, where she chased goats and cows barefoot, but otherwise life in the capital wasn’t too different from life in the U.S. She started learning English at age 2.
In 2004, Kandemiri’s father, Jonga, got a job as a broadcaster in the U.S. and moved his family to Silver Spring, Md. Kandemiri followed some friends onto the Springbrook High lacrosse team.
Kandemiri, whose friends call her “Tee” or “T-Ro,” created her Twitter alter ego and eventually got followed and retweeted by some big names — like Danielle Etrasco and Dana Dobbie.
She writes for Inside Lacrosse and thinks maybe all of this can lead to a career. But she hasn’t told her family in Zimbabwe.
No lacrosse in Africa
“I haven’t really had the chance to explain to them what lacrosse is,” she said. “There’s no lacrosse in Africa except for Uganda, which is awesome.”Advertisement

Then she goes on, without skipping a beat, to praise the work done by Uganda lacrosse, and how great it was to see them debut (and even win two games) as the first African nation to compete in the FIL World Championship — and how, maybe, someday, she can go back and be the one who brings lacrosse to Zimbabwe.
In moments like this, it is clear why @officiallaxgirl is so popular. She knows everything and can switch from irreverence to seriousness without wasting a breath, which is helpful considering her 140-character limit.
“She’s so humble with the whole thing,” said her sister, Tapiwa.
“Every time she talks to me about it she’s like, ‘I don’t want to disappoint my followers.’ I see other people with popular pages and they start losing themselves. But she just tries to stay true to herself and her followers.”
Kandemiri attends Sewanee on a Posse scholarship, annually given to just 10 students from the D.C. area.
Former Princeton lacrosse player Peter Smyth served as her mentor. Smyth heard about a lacrosse-mad girl from Zimbabwe who needed a mentor.
They met at Starbucks, and Kandemiri intercepted Smyth as soon as he arrived. She knew exactly who he was, because she had spent the previous hour researching his lacrosse bio.
“She’s a Syracuse fan,” Smyth said. “But she went on Princeton’s website that day.”
Smyth told her to use the approach she uses in writing her tweets as a guide in crafting her essay.
“They always say ‘I can see you in the tweets,'” Kandemiri said. “That’s just my personality. I’m into making jokes, being laid back and hyper.”
Hyper and laid back
That seemingly impossible dichotomy — hyper and laid back — simultaneously describes your average lax girl and Official Lax Girl’s appeal. Her identity remained a secret until her parents encouraged her to share in some of her alter ego’s success.
“We said, ‘There are people who like you and they should know who you are,'” said her mother, Portia. “You should be one in the same.'”
Now that her name is out there, in true Internet fashion, Kandemiri has started posting selfies. It’s not vanity. She may be the Official Lax Girl, but she’s not exactly what many picture as a typical lax girl.
“People say, ‘No offence, but before I met you I thought you were white,'” Kandemiri said. “I want people to know what I look like.”
Kandemiri’s favorite player is Michelle Tumulo, whom she met at a concession stand at last year’s NCAA championship, moments after signing autographs herself. But Taylor Thornton is right up there, too.
“I could turn on the Big Ten Network, and there’s Taylor Thornton running down the field, and that girl kind of looks like me,” Kandemiri said.
“She’s No. 9. I wore No 9 at the time. Our names start with a T. So I’m basically Taylor Thornton.”
Then Kandemiri laughs. It’s funny when you think about it. But to some, she’s as much of an icon as Thornton.
“I want to show people who aren’t the stereotypical lacrosse players that we come from so many places and from so many races,” she said.
Kandemiri still gets a kick out of it all. When someone writes to tell her she has inspired her to keep going after a bad practice. When someone favorites a tweet about her wall ball addiction.
When Katrina Dowd followed her, Kandemiri called her sister to brag.
“OK,” Tapiwa Kandemiri responded. “Who is Katrina Dowd?”
But now, with Tariro’s encouragement, Tapiwa plans to try out for UMBC’s club team.
“I knew she made it when Tom Schreiber followed her,” Smyth said. “I’m friends with the kid and he doesn’t even follow me.”
When Official Lax Girl hit 10,000 followers — a legion that includes John Grant Jr., Myles Jones, Casey Powell and Kyle Harrison — she ran into the kitchen to tell her mother, who isn’t on Twitter and asks permission before looking at her daughter’s tweets.
“Mom, I got 10,000!” she yelped.
“Oh. Good job,” her mom replied. “But you still have to move your lacrosse stuff out of the foyer.'”
File that one under official lax mom problems.
Tariro Kandemiri: Official Lax Girl