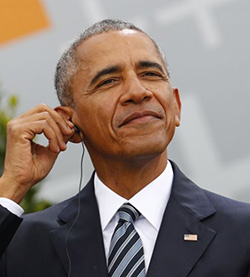 “We are here to talk about trade. In my experience, politicians come and go but businessmen stay.”
A VISITING United States trade delegation, which is in the country on a rare trade visit, says it is impressed by the business opportunities in Zimbabwe and promised a follow-up visit next month for further talks.
The trade delegation, which has been in the country since Wednesday on a three -day mission to explore investment opportunities, is representing businesses in the financial, agriculture, mining, engineering, energy, waste technology and hospitality sectors.
Addressing journalists on Friday, head of delegation Phillip de Leon said they had met with government officials and representatives of local companies.
“My assessment based on the two days we have spent here is that Zimbabwe is open to business. There are business opportunities everywhere so now the real work starts. We need to do follow ups. My perception at this stage is very positive,” he said.
De Leon, who is representing the Corporate Council on Africa on its maiden visit to the country, as well as an agriculture company, AGCO said there was vast potential in the sector which the country could exploit to reduce imports.
“You have an extraordinary potential in agriculture and we need to wake up the lion. My goal is to see how we can further develop agriculture,” he said.
“We agreed different things at different levels and one of my colleagues will come back in July.”
He urged Zimbabwe to market itself, especially at the forthcoming CCA summit to be held in Addis Ababa, Ethiopia in November 2 – 5 which will bring together traders from the US and Africa.
“You have to market Zimbabwe. We live in a competitive world where everybody is trying to win attention,” he said.
AGCO, which is already involved in grain storage in the country, is planning to expand its distribution network and bring more brands into the country should the need arise, he added.
“Investment will be dependent on how much volumes we can bring into Zimbabwe,” he said, adding that there was need to also promote local exports to the US.
“Some of the solutions the companies we are representing are offering are ways to increase production in Zimbabwe that would enable you to export. It’s a process that has started and we are looking at all the options,” he said.Advertisement

He said he was aware of the challenges facing the country, such as lack of access to capital and had also been briefed about the indigenization law which requires locals to control 51 percent stake in foreign-owned companies.
“My approach to come into a country is having a clear understanding of the legal environment and any investor makes sure it is predictable, foreseeable and stable over time,” he said.
“We have had interesting conversation, notably on the 51 percent rule, on indigenisation rules and so we got some clarifications which enable us to better understand the situation. I think a clear understanding of what the legislative environment is very critical.”
Responding to whether the strained relations between the two countries won’t affect trade, de Leon said:  “We are staying away from politics.
“We are here to talk about trade. In my experience, politicians come and go but businessmen stay.”
The visit was facilitated by the American Business Association of Zimbabwe (ABSZ), a voluntary business promotion organization whose primary objective is to promote business between Zimbabwe and US.
CCA was established in 1993 to foster greater trade relations between the United States and Africa. The organization comprises 180 companies and 20 percent of those are from Africa.