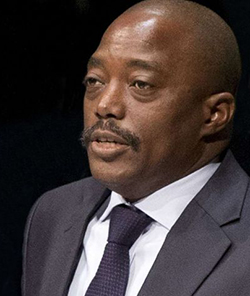 NEW York: US Ambassador Nikki Haley urged the Security Council on Monday to use pressure if necessary to ensure that long-delayed presidential elections in the Democratic Republic of Congo take place December 23.
She denounced the use of force by DRC government against opposition demonstrators and demanded that Congolese authorities release political prisoners and guarantee freedom of expression and assembly.
“These changes are desperately needed right now in DRC,” Haley said at an informal council meeting. “Use of excessive force against civilians who simply want a say in their future is against everything the UN is supposed to stand for.”
Haley also warned that the country’s electoral commission’s decision to use an electronic voting system for the first time without it ever being tested in DRC poses “enormous risk” and “has the potential to seriously undermine the credibility of elections”.

“The United States has no appetite to support an electronic voting system,” she said.
Electoral Commission President Corneille Nangaa said using voting machines that enable every voter to print a ballot before putting it into a ballot box will save $123 million, lowering the cost of holding the election to about $432 million from the initial estimates of $555 million.
Ida Sawyer, the Central Africa director for Human Rights Watch, warned that voting machines could be used fraudulently.
“Over the past three years President (Joseph) Kabila and those around him have used one delaying tactic after another to postpone elections and entrench their hold on power through voter repression and large-scale violence,” abetted by “systemic corruption,” she told the council.
She cited the arrest of hundreds of opposition supporters and activists as well as trials “on trumped-up charges.”
“Kabila has not demonstrated that he is prepared to step down,” Sawyer said. “The key question today is: What makes this time different? What will convince Kabila and other senior officials that the international community will not tolerate further delays and that human rights violations against protesters, civil society activists, opposition member and journalists need to end to allow for a credible, fair and peaceful process.”
Peaceful transition of power Advertisement

DRC’s foreign minister, Leonard She Okitundu, said his country was being unfairly characterized.
“The Democratic Republic of Congo is not hell for human rights as it is being wrongly presented,” he said. “Rather it faces, like many other great democracies, the difficulty of balancing law and order with public security and respect for individual liberties.”
Haley, who presided over the council meeting, had the final word and stressed that the international community wants to help DRC to see a peaceful transition of power.
“I will tell you instead of voicing your frustration, we would appreciate good actions … to have free and fair elections,” she said, “and to actually show actions — not yelling at the bishops, not blaming everyone else — but to make sure you understand that your country and your administration is responsible for the suffering of the people of the country.”