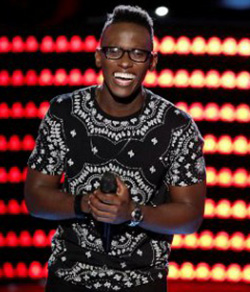 LAST week on The Voice, Brian Nhira became the latest artist to perform a coach’s song when he chose to audition with Pharrell Williams’ massive hit single “Happy.”
His version of the song earned him a place on Team Pharrell, and Starpulse spoke to Brian afterward about what motivated him to cover a coach’s song in front of the original artist – and which other coach his father wanted him to pick!
“I chose ‘Happy’ as my audition song [after] I saw an interview with Oprah [Winfrey] and Pharrell,” Brian recalled.
“It was after ‘Happy’ had been out for a little while and it was obviously just a smash hit. People loved it, people all over the world were just singing the song.
“Oprah actually showed Pharrell a video of people singing ‘Happy’ all over the world in different languages, different cultures,” he continued, “and Pharrell began to weep uncontrollably.”
It was a moment that stayed with Brian forever.
“That really did something to my heart when I saw that,” he reflected, “because I hadn’t seen that much feeling in artists, in producers, in people in the music industry in so long.
“It was just so refreshing. And I knew that this song was bigger than him. I wanted to do a song that was bigger than me and so that’s why I chose ‘Happy,'” he explained.
“And also, you can’t help but smile whenever you listen to ‘Happy.’ And so I was hoping I could make the judges smile.
But didn’t he get nervous realizing that he was about to perform one of Williams’ most successful songs in front of Williams himself?
“I really didn’t think much about it until a couple of days before the audition,” he said.
“I didn’t put too much pressure on myself because I felt like I had a different version of the song. The biggest thing that I was hoping is that Pharrell would appreciate it.
“I wanted him to enjoy what I did with the song because it is such an amazing, amazing song.”
Brian did reveal that while he had his heart set on joining Team Pharrell when he auditioned for The Voice, his family had a different opinion on which of the coaches he should sign up with.
You know, going into the audition I really did want Pharrell,” he said.
“But when Blake [Shelton] turned around, I could see how bad he wanted it. He really was so respectful and he really was so kind with how he presented it.Advertisement