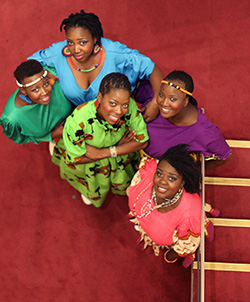 IT’S the first time in the U.S. for traditional Zimbabwean a cappella quintet Nobuntu and Duduzile Sibanda said the all-girl group is having a fantastic time.
“We’re enjoying America very much,” she said. “We’ve been here about three weeks. It’s everything we hoped for.”
Nobuntu, which performed Thursday night at Ferrell Hall Auditorium at West Virginia State University in Institute and will be at Carnegie Hall in Lewisburg Friday night, was formed six years ago by Tenth District Music in Zimbabwe.
“It’s a record label,” Sibanda said. “They made a call, looking for people who sing imbube, a traditional a cappella style in Zimbabwe.”
The five women were chosen from dozens who came, mostly from the city of Bulwayo, the second-largest city in Zimbabwe.
“Some of us knew each other,” she said. “It’s not a very big city. Some of us went to the same high school and we knew each other from city festivals.”
The group performs a mix of traditional songs, originals and Afro-Jazz. Sibanda said they came together because of an audition, but their creative direction has been their own.
“We have the power,” she laughed.
They choose their own material and write songs.
“Part of our songs are very traditional,” Sibanda said. “But we also sing of our own life journeys and what we see every day.”
The music is from a very feminine perspective.
Sibanda said the group has enjoyed their career. They’ve played through Africa and Europe, but coming to the U.S. has been a treat.
“Shopping!” She exclaimed and then added, “People here are very nice. You get a smile with every hello.”
It also helps that Americans understand English.
“We speak English,” she said. “It helps. It’s been lovely.”
In Europe, language could be hit or miss and not everyone was nice.
Sibanda said the tour would only last six weeks, but that they always miss home when they’re away.
“We miss the food,” she said. “Your beef doesn’t taste like our beef. Your chicken doesn’t taste like our chicken. It’s all prepared very differently.”
She said they also missed sadza, a staple food in Zimbabwe made using cornmeal.Advertisement

It’s a short tour. Nobuntu leaves for home Nov. 21, but hopes to come back to the U.S. sometime next year.
“A different part, I think,” she said. “But maybe one day we come back here, too.”