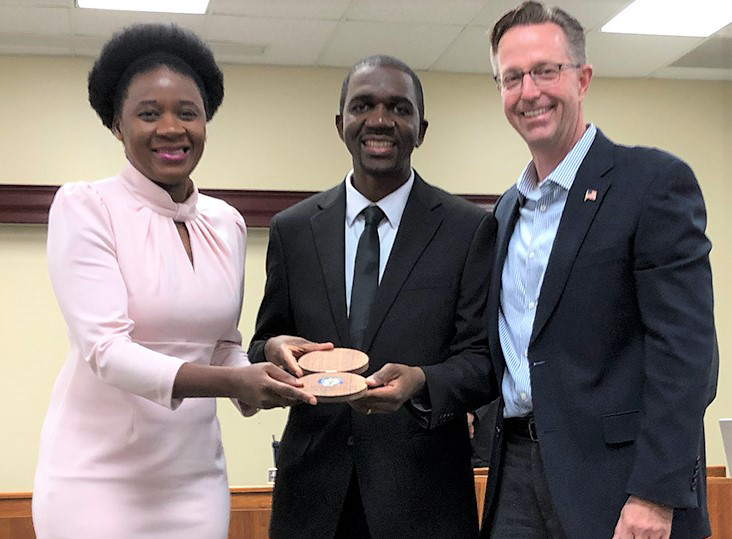 A ZIMBABWEAN businessman based in the United States was recently honoured with the Mayor’s Excellence Award for the month on October in the Illinois town of Edwardsville.

Pharmacist and co-owner of JewelRibe, Tapiwa Mupereki, was commended for his efforts in encouraging literacy among children during a meeting of the Edwardsville City Council earlier this month.

“Where would we be as a community without people who, when they see a need, automatically spring into action?” council’s Communications Coordinator Cathy Hensley was quoted as saying by theintelligencer.com.

“The mayor’s Excellence in Edwardsville recipient for October is that kind of person. Tapiwa Mupereki is a pharmacist and the co-owner of JewelRide, a business that enables people to safely get to and from their medical appointments. In other words, he has a heart for helping.

She continued; “He also has an inspiring respect for the promise of education and literacy.

“He was born in Zimbabwe, and raised by a single mom who instilled in him the transformative power of reading. Earlier this summer, he approached the library with a wonderful idea: his business would sponsor a ‘books for bikes’ summer reading challenge, encouraging both literacy and good health through physical activity.

“He contacted The Cyclery and spent $3,500 to purchase 10 bicycles, helmets and water bottles as prizes for book challenge participants,” she said. “Then, he thought, ‘What more can we do?’ So he asked The Cyclery, BJ’s Printables, YCG Accounting, among others to help, raising the number of bicycle prize packages to 14.

“When it was all done, more than 250 children, ages kindergarten through eighth grade, logged more than 9,200 books. That’s an impressive act that exemplifies Excellence in Edwardsville,” Hensley said. “The city is happy to recognize his kindness and generosity with this award.”

Commending on the award which he received with his wife Dr. Rutendo Faith Nkomo, Mupereki said; “This is really amazing,” he said. “This is very humbling. It came as a surprise when I got a call about this award.

“To those who don’t know about JewelRide, we are a healthcare mobility company, based right here in Edwardsville,” Mupereki  said. “What we provide is medical transportation. We take people to medical appointments. A lot of people don’t know that is a major problem in this country. Every year, at least five million people fail to go to medical appointments because of a lack of reliable transportation.

“We are really excited about it,” he said. “We are very grateful for the love and acceptance we get from Edwardsville. It’s a wonderful city.

“Just to be here is unthinkable!” he said. “I grew up in a rural village; I never thought one day I would be surrounded by distinguished people like this. This is really amazing.”