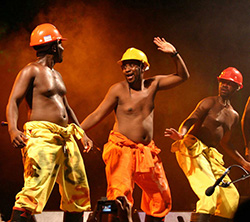 UNITED States: The all-male performance group brings rich, heartfelt harmonies to local audiences during a free Tuesday concert at Pennsylvania State University.
Last October, Nobuntu, a female quintet brought the sometimes humorous, sometimes sad, but always warmly sympathetic a capella vocal style of Ndebele music to Penn State Behrend’s Music at Noon: The Logan Series.
Now it’s time for the all-male Black Umfolosi to take the stage this Tuesday during the college’s Rhythms of Life Series.
Those not too familiar with the joyous and deep music of Zimbabwe, will probably at least recognize the sound. It was all over the soundtrack to Disney’s mammoth “The Lion King” franchise, as filtered through the South African vocal group Ladysmith Black Mambazo.
The call-and-response forms, rich, gospelly vocal harmonies, wry humor and deep feeling are all there. So is rhythm and a rich theatrical sensibility.
Both come together in a signature moment of Black Umfolosi’s show, which is hitting the road for a new North American tour February through mid-April.
In the Gumboot Dance, the shirtless members of Black Umfolosi stomp onstage wearing rubber Wellington boots, called gumboots in South Africa.
The dance is a narrative with music about the joys and travails of that country’s miners, but despite the language barrier, anyone in the audience can recognize the gestures of shoveling and digging that are so vividly mimed.
This article is taken from goerie.com
Advertisement