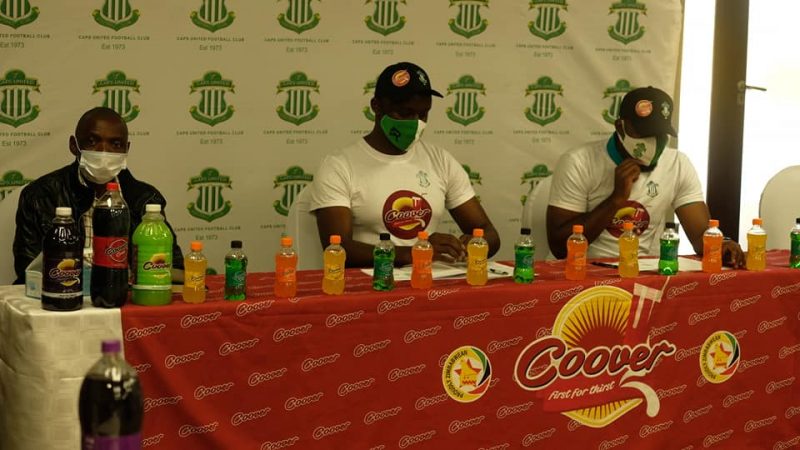 CAPS United have received a major boost ahead of the start of the season-opening Premiership cup competition set to kick off next weekend after clinching a US$30 000 sponsorship deal with a local beverage company, Coover Bottlers.

The company, which is owned by Zimbabwean entrepreneur Faraimose Kutadzaushe, will cater for CAPS United’s beverage needs for the next three years according to details of the three-year partnership unveiled in Harare Thursday.

“This is a partnership between Coover Bottlers and CAPS United; the idea behind this is that we as Coover Bottlers want to ensure that the players are well taken care of,” said Kutadzaushe.

The value of the sponsorship deal might increase to US$50 000 per season depending on its success.

“We will be working with CAPS United on various initiatives which are more social media-based so that we can engage with the supporters of CAPS United. We want CAPS United to succeed; to actually make sure the players are well catered for so they can ply their trade and they let us worry about how they are revitalised.”

The Green Machine head of commercial and media, Raymond Gonde, said the Coover Bottling deal marks the beginning of a new commercial era at the club.

“Over the years, CAPS United have been successful on the pitch, churning out a long list of football stars.

“CAPS United is undoubtedly a big club. One cannot talk of local football and omit CAPS United. But the said success has to be spurred on so that the great name of the Green Machine is carried on.

“In modern football that can be done by implementing and pushing for sport as a business.

“In 1999, CAPS United were the first team to turn professional, and today through this partnership and more to come, let me emphasise: more partnerships are coming. We will be the first to implement the ‘sport is business mantra’,” said Gonde.