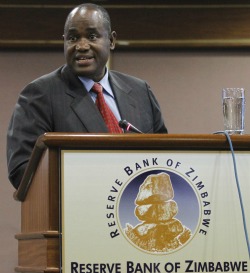 THE government has raised $42.5 million by selling debt of up to one year’s duration to selected investors after public Treasury Bill sales by the central bank failed, a finance ministry official said.
About $20 million of the notes were bought by an insurance company through the private placement with the rest coming from four banks, the person said, asking not to be identified because the transactions haven’t been made public.
He also declined to name the financial institutions or say why the money is being raised.
In October last year the Reserve Bank of Zimbabwe began a series of failed Treasury Bill auctions.
Those debt sales were the first in the country since 2008, just before Zimbabwe abandoned its currency in favour of the U.S. dollar and the South African rand to combat an inflation rate estimated by the International Monetary fund at 500 billion percent.
Zimbabwe’s economy contracted by 40 percent between 2000 and 2008 after President Robert Mugabe ordered the seizure of white-owned farms for redistribution to black subsistence farmers, slashing exports. The country has been in default to international creditors since 1999.
The duration of the debt sold is 180 days to one year with yields of 7 percent to 10 percent, the person said. Zimbabwe’s annual inflation rate was 0.59 percent in October.
Finance Minister Patrick Chinamasa and his deputy Samuel Undenge weren’t available for comment.
Foreign banks that operate units in the country include the U.K.’s Barclays and Standard Chartered, Old Mutual and Standard Chartered Plc, Togo’s Ecobank Transnational as well as South Africa’s Standard Bank Group and the Nedbank Group.Advertisement