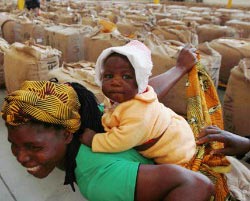 SOME 145.2 million kilogrammes of tobacco have been delivered to the country’s auction floors since the beginning of the selling season in February, surpassing the 2012 final output of 144.5 million kg.
Figures from the Tobacco Industry and Marketing Board (TIMB) also show that $537.5 million has so far been realised from the sales.
“Current seasonal sales at 145.2 million kg have now surpassed the 2012 final output which was 144.5 million kg. During the corresponding 79th selling day in 2012 more than 116.6 million kg were sold,” the TIMB said in a statement.
“The prevailing prices at all selling points remained stable. The seasonal average price for 2013 is likely to slide down below US$3.70/kg as less good quality crop continue to dominate the market.”
The seasonal average price for this year’s crop was $3.70 a kg compared $3.73 a kg during the same period last year.
TIMB said 94.7 million kg of the delivered tobacco was from contract farming, while 50.5 million kg had been delivered under the auction system.
The contract system has so far generated $357.5 million while the auction arrangement has raised $179.9 million.
The tobacco marketing board revealed that 1.98 million bales had so far been laid at the auction floors compared to 1.49 million bales during the comparable period in 2012.
This season 83,012 bales have been rejected compared to 78,284 last year.
Recently, the tobacco marketing board expressed optimism that this year’s deliveries would surpass the targeted 170 million kg although most of the registered growers have delivered their crop.
However, some of the farmers wait to sell the bulk of their crop towards the end of the season.Advertisement