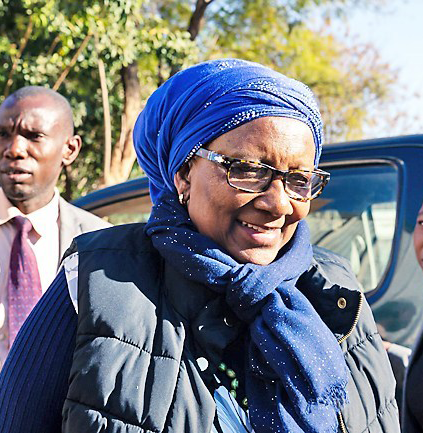 A DARING attempt to challenge fraud-accused former cabinet minister, Prisca Mupfumira, ended in tears for one Martha Munondo-Tafirenyika after she was disqualified at the last minute, allegedly on the basis of lacking seniority.

This is despite her earlier clearance by the party’s headquarters to stand in the weekend Zanu PF Central Committee (CC) Makonde women’s quota polls.

Should the move to side-line Tafirenyika sail through, Mupfumira would be elected unopposed into the coveted party organ.

Tafirenyika is a councillor in the yet-to-be functional Mashonaland West Provincial Council, and has held senior positions within the ruling party.

She confirmed the latest twist to NewZimbabwe.com Friday evening, saying she got a phone call from Zanu PF provincial political commissar, John Yotamu, informing her of the disqualification.

“Yes, l have been told that l cannot contest and the reason that has been given is that of seniority,” she said.

“How could they wait until the last minute after l had already campaigned the length and breadth of Makonde up to Chijaka, visiting each and every chairlady, going as far as Jechenene in Mhangura, wasting my resources from the sale of farm produce, all for nothing.

“There is corruption in all this. How can they protect someone who has pending corruption cases to contest in the election. The world is watching, what would people say of us allowing someone who hasn’t been cleared of corruption?”

The former Public Service and Social Welfare minister is still appearing before the courts in a matter relating to US$90 million fraud at the National Social Security Authority (NSSA).

Efforts to get comment from Yotamu were fruitless by the time of publishing.

Information reaching NewZimbabwe.com is that a coterie of disgruntled Zanu PF members was planning a demonstration at the party’s provincial headquarters Saturday.

Sources within the ruling party said some contestants were dangling carrots to lure the electoral college comprising of district chairpersons of the party organs namely, Women’s and Youth Leagues and Veterans of the Liberation Struggle League.

In various instances, sources claimed, would-be voters were gifted tablets, mobile phones, fuel coupons, food hampers and cash while others were booked at lodges and hotels to spend quality time ahead of the dog-eat-dog polls scheduled for Saturday.

Rampant vote buying has been reported across the country despite warning by President Emmerson Mnangagwa to stop as it had a negative effect on the 2023 harmonised election results.