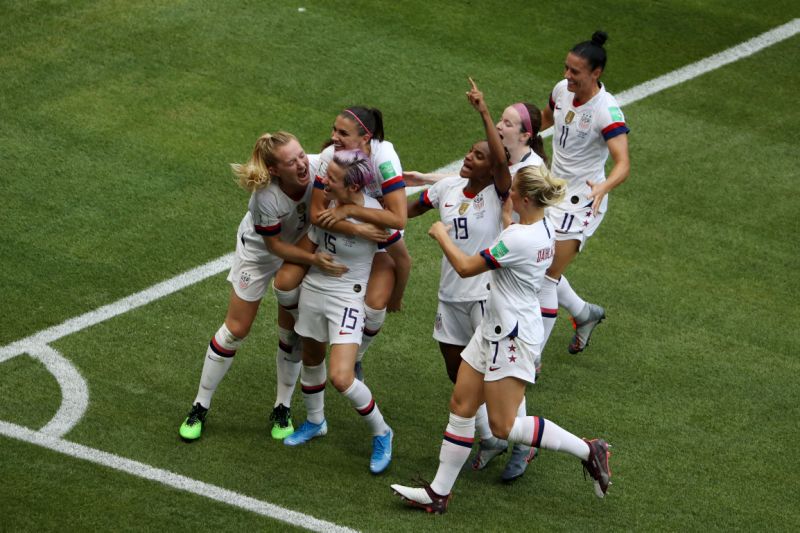 The United States won the Women’s World Cup for a record fourth time with as they eventually overpowered the Netherlands in Lyon.

Megan Rapinoe’s penalty and Rose Lavelle’s fine run and finish gave the defending champions victory in the second half, after resilient first-half defending from the Dutch.

Veteran winger Rapinoe’s calmly-slotted opener came from a spot-kick awarded after a video assistant referee (VAR) review, at the end of a tournament in which the system has been a major talking point.

Barcelona defender Stefanie van der Gragt’s high boot caught USA striker Alex Morgan and French referee Stephanie Frappart pointed to the spot after assessing replays, and the holders did not look back after taking the lead.

The European champions, reaching the final in only their second World Cup, kept the favourites at bay in the first half as former Arsenal goalkeeper Sari van Veenendaal produced four excellent saves.

But the USA, playing in their third consecutive final, continued their reign as the world’s finest side as they added to their titles of 1991, 1999 and 2015.

Victory for the USA saw their English-born boss Jill Ellis, from Hampshire, become the first coach to lift the trophy twice.

Her side’s second consecutive world title was a hard-fought one, but they have been the best side in a 24-team tournament that was fiercely contested, despite facing more serious trophy contenders than four years ago.

They laid down a daunting marker in their first match of the competition as they cruised to a 13-0 win over Thailand – the biggest-ever victory at the finals.

Comfortable successes over Chile and Sweden followed, before they faced three much more detailed tests of their title credentials in the knockout rounds but battled to a trio of 2-1 wins over Spain, hosts France and England.