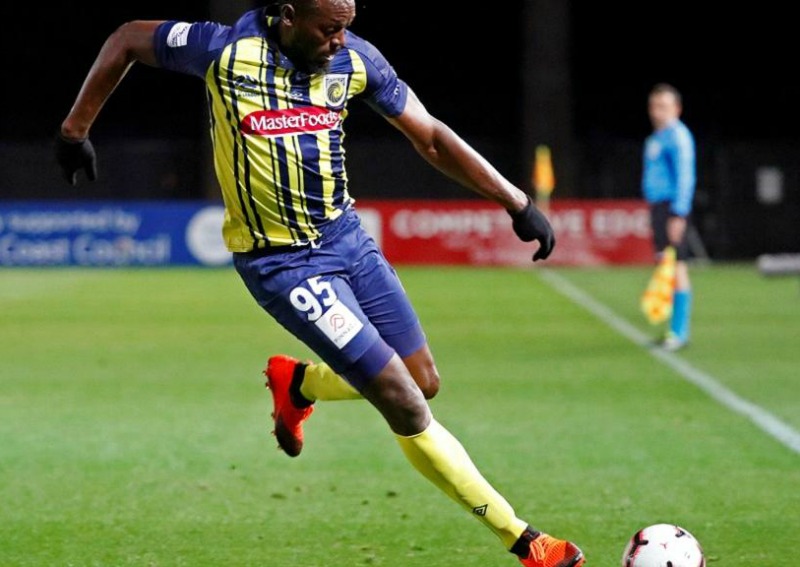 Former World and Olympic champion, Usain Bolt is scoring his way into the hearts of people all over the world again, this time as a professional football.

The Jamaican sprinter who retired from athletics into football scored two goals in his first start for the Central Coast Mariners in a trial match on Friday.

32-year-old Bolt hopes to win a professional contract ahead of the Mariners’ 2018-19 A-League campaign was instrumental for the Mariners who recorded a 4-0 win over Macarthur South West United.

He scored his first in the 57th minute when he shrugged off a defender on the left before unleashing a hard, low shot past the goalkeeper at the near post.

Bolt pointed to the sky in his trademark ‘lightning bolt’ celebration, but the world’s fastest man still had more to offer.

His second goal came in the 68th minute when Bolt pounced on a defensive error to tap home from close range.

“My first start and scoring two goals, it’s a good feeling,” Bolt told Fox Sports after he was substituted in the 75th minute.

“I’m happy I could come here and show the world I’m improving. I’m keen to be a Mariner, to play my best and get into the team.

“The coach said to me, you’ll get chances, you’ll score some, you’ll miss some, don’t put your head down, keep your head up and try for the next one.”

Bolt’s last appearance for the first team was against an amateur select side in August, where he came on as a late substitute and appeared to lack match sharpness.

Former Australia goalkeeper Mark Bosnich said although there were improvements in his game, Bolt still had a long way to go to transform himself into a professional soccer player.

“Slight improvement if you want to say that but his touch is still very poor,” Bosnich, currently a Fox Sports commentator, said during the match.

“His speed endurance is a little bit better but he still looked tired after 15-20 minutes. He just looks a little bit sharper, not a great deal to be honest. There’s a slight improvement but not very much.”

But Bolt seems to have done enough to impress his millions of fans around the world.