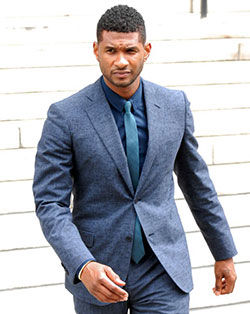 USHER has described his marriage to Tameka Foster as his “best mistake”.
The 35-year-old singer opened up to the September issue of Oprah Winfrey’s O magazine about his divorce from stylist Tameka – to whom he was married from 2007 to 2009.
When asked about his best mistakes, Usher replied: “Getting married at 28.”
He continued: “Most people probably think I regret it because I ended up getting divorced, but it helped me learn that sometimes I think I know more than I actually do.”
Usher was locked in a lengthy custody battle with Tameka, before he was made primary guardian of their two children, six-year-old Usher ‘Cinco’ Raymond V and five-year-old Naviyd Ely Raymond in 2012.