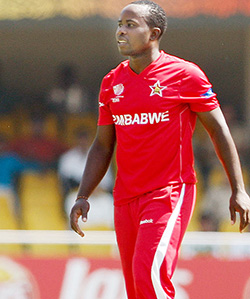 ZIMBABWE offspinner Prosper Utseya has, in a letter to Zimbabwe Cricket, claimed that he is a victim of racism and has levelled a string of allegations against Alistair Campbell, managing director of ZC. In a letter to Wilson Manase, ZC chairman, Utseya claims Campbell:

Has a “personal agenda” against him which influenced his non-selection [in the playing XI] at the recent World Cup.
Appointed white coaches and administrators during his 2010-2012 stint as chairman of the cricket committee in order to take control of cricket.
Had a conflict of interest in setting up Dominus Sport, the company that ran ZC’s marketing affairs during his time as cricket committee chairman, and his actions had an impact on ZC’s funds.

Utseya confirmed to ESPNcricinfo that he had written the letter after the World Cup and prior to Zimbabwe’s tour of Pakistan, but could not comment further at this stage. Campbell said he was unable to comment as the matter was pending either legal or internal disciplinary action.
With Utseya openly basing some of these claims in the letter on “rumour”, he would appear to be open to legal action, though the matter may ultimately be dealt with internally at ZC. It is understood that ZC is currently investigating the letter.
“Racism and Victimisation”
The letter copies all ZC board members and bears the headline “Racism and Victimisation”, and begins: “Through you Mr. Chairman I wish to share my frustrations as I believe I am a victim of racism and have come to a point where I feel I have been quiet for too long whilst a lot has been happening.”
After more than 10,000 words, Utseya finally closes his case with a plea for the board to consider his concerns.
Utseya, who was in Zimbabwe’s World Cup squad but did not get a game, claims he considered leaving the World Cup prematurely out of frustration, and cites Campbell’s pre-tournament comments as a back story to support his contention that ZC’s managing director conspired against his potential selection.
Last year, the ICC banned Utseya from bowling offspin, and in a guest column for the governing body in the lead-up to the World Cup, Campbell wrote: “I’m still a bit baffled by how Prosper Utseya will get on without being allowed to bowl his off-spinner, but no doubt he’ll find a way.Advertisement

“He’ll certainly be the only bowler in the tournament without a ‘stock’ ball. He has been bowling medium-pacers and off-cutters recently so perhaps that is the way he will go.”
Utseya was banned from bowling after testing in September 2014. In December, his offbreak was found to be illegal but his other deliveries were deemed legal, and so he was cleared to bowl again so long as he did not utilise his stock ball.
His new method was field-tested for the first time on a trip to Uganda in December 2014 and he then captained Zimbabwe A against Canada at home in January.
In four games he took five wickets at an average of 17.80, bowling his full 10 overs in every match, never conceding more than 24 runs, and also contributed useful runs down the order.
In his letter, Utseya uses this as evidence that he deserved to be picked at the World Cup, but does not elaborate on how Campbell was able to influence selection at the tournament.