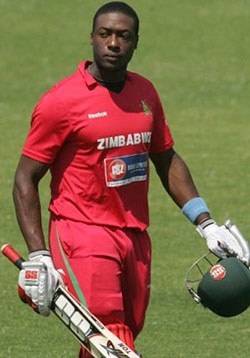 ALL-ROUNDER Proper Utseya has had his bowling action reported following the recent One-Day International series against South Africa with his arm ball and quicker ball set for further scrutiny.
He was reported following the third match in Bulawayo, which South Africa won by seven wickets to wrap up a 3-0 series win.
Utseya will now have to undergo independent testing of his action, within 21 days, during which time he will still be allowed to bowl in international cricket.
“The match officials’ report, which was handed over to Zimbabwe team manager Stanley Chioza on Thursday, cited concerns regarding Utseya’s arm ball and fast delivery, and concluded that the bowler’s action needed to be tested,” an International Cricket Council (ICC) statement confirmed.
“Utseya’s bowling action will now be scrutinised further under the ICC process relating to suspected illegal bowling actions reported in Tests, ODIs and T20Is.
“He is required to undergo testing within 21 days, and, during this period, Utseya is permitted to continue bowling in international cricket until the results of the testing are known.”
Utseya made his international debut in 2004 and has since taken 10 wickets in four tests and 123 wickets in 156 ODIs. The right-handed batsman also has 24 wickets in Twenty20 internationals.
He is the latest in a number of spinners to come under scrutiny in the past 12 months, following Shane Shillingford, Kane Williamson, Sachithra Senanayake and Seed Ajmal.
The governing body allows a 15-degree limit for all bowlers to flex their elbows but the ICC cricket committee, at its meeting in Bangalore during the first week of June, noted that there were a number of current bowlers bending that rule.
While the ICC has not given any new directive to match officials to be more vigilant about chucking, the renewed vigour in identifying bowlers with illegal actions has been evident.
“It is something they are expected to do as part of their job,” Geoff Allardice, ICC general manager for cricket, told Reuters recently.
“Although the concern about suspect actions expressed after the recent ICC cricket committee and chief executives meetings may have given the umpires greater confidence to report.”Advertisement