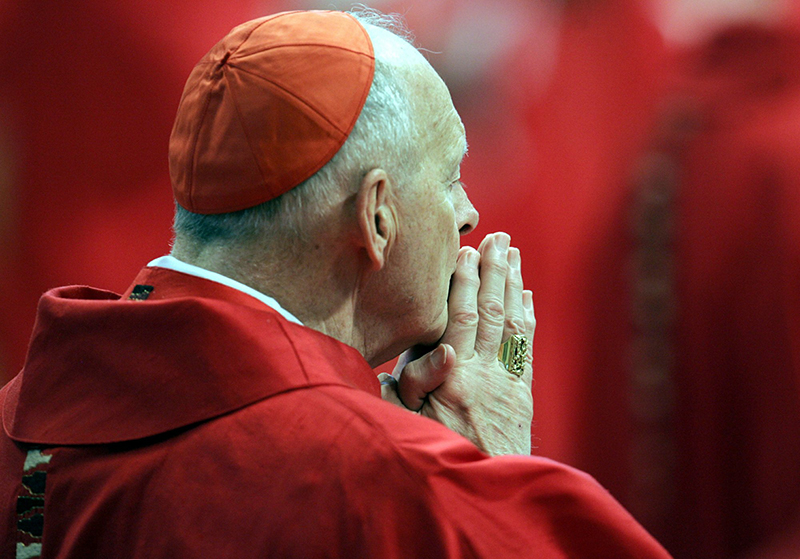 VATICAN CITY: Former Cardinal Theodore McCarrick has been found guilty by the Vatican of sex abuse and defrocked, as calls rose Saturday for Pope Francis to reveal what he knew about the once-powerful American prelate’s apparently decades-long predatory sexual behaviour.

The announcement Saturday, delivered in uncharacteristically blunt language for the Vatican, meant that the 88-year-old McCarrick, the former archbishop of Washington, D.C., becomes the highest-ranking churchman and the first cardinal to be punished by dismissal from the clerical state, or laicization.

He was notified Friday of the decision, which was upheld upon his appeal and approved by Pope Francis.

The pontiff next week leads a summit of bishops from around the world who have been summoned to Rome help him grapple with the entrenched problems of clerical sex abuse and the systematic cover-ups by the Catholic church’s hierarchy.

Decades of revelations about priests who have sexually preyed on minors and their bosses who shuffled abusive clergy from parish to parish instead of removing them from access to children have shaken the faith of many Catholics. They also threaten the moral authority of Francis and even the survival of his papacy.

McCarrick, who in his prestigious red cardinal robes hobnobbed with presidents, other VIP politicians and pontiffs, is now barred from celebrating Mass or other sacraments including confession and from wearing clerical garb. He is to be referred to as Mr. McCarrick.

The Congregation for the Doctrine of the Faith, the Holy See’s guardian of doctrinal purity, issued a decree on Jan. 11 finding McCarrick guilty of “solicitation in the sacrament of confession, and sins against the Sixth Commandment with minors and adults, with the aggravating factor of the abuse of power,” the Vatican said. That commandment forbids adultery.

On Wednesday, Congregation officials considered his appeal and upheld the decree.

The pope “recognised the definitive nature of this decision made in accordance with (church) law, rendering it as ‘res iudicata,’” the Vatican said, using the Latin phrase for admitting no further recourse.

The McCarrick scandal was particularly damning to the church’s reputation because it apparently was an open secret in some ecclesial circles that he slept with adult seminarians. Francis yanked McCarrick’s rank as a cardinal in July after a U.S. church investigation found credible an allegation he fondled a teenage altar boy in the 1970s.

McCarrick’s civil lawyer, Barry Coburn, said Saturday that his client had no comment on the defrocking.

Coburn declined to say if McCarrick would stay at the residence in Kansas where he moved after Francis ordered him to live in penance and prayer while the investigation into his actions continued.

But the Salina, Kansas, diocese, said “Mr. McCarrick will continue to reside at the St. Fidelis Friary in Victoria until a decision of permanent residence is finalised.”

Besides bishops arriving for the sex abuse summit, victims’ rights advocates are also converging on Rome. They are demanding that Francis, other Vatican officials and bishops elsewhere come clean about how McCarrick managed such a meteoric rise through church ranks despite reports about his sexual life.

“The pope has known from the earliest days of his papacy, or he should have known, that ex-cardinal McCarrick was a sexual predator,” said Anne Barrett Doyle, an advocate at BishopAccountability.org.

“He has a resistance to removing bishops and he also has a tolerance for bishops who are sexual wrongdoers,” Doyle told The Associated Press on Saturday near St. Peter’s Square.

Of the defrocking, Doyle said: “Let McCarrick be the first of many. I can think of 10 other bishops who are substantively, credibly accused of sexual abuse with minor and sexual misconduct with adults, who should be laicized.”

A conservative lay group, The Catholic Association, said in a statement that much more must be done to hold accountable “those in the church hierarchy who looked the other way as McCarrick rose through their ranks” and to ensure that priestly celibacy is restored and youths are safeguarded from sexual abuse.

Walking with Doyle was Phil Saviano, a board member of BishopAccountability.org, and a survivor of sexual abuse by a priest. While calling McCarrick’s defrocking “ultimately a good thing,” he said the punishment should have been meted out long ago.

He said he hoped Francis isn’t “throwing a bone to his dissenters in an attempt to quiet everybody down. And then McCarrick will be the one and only, because there are certainly many others who have allegations against them who should face some accountability.”

His account of being abused helped the Boston Globe produce a Pulitzer-winning investigation into church cover-ups, which was chronicled in the movie “Spotlight.”

When ordained a priest in his native New York City in 1958, McCarrick embraced a vocation that required celibacy. Later on in his career, McCarrick curried cachet at the Vatican as a stellar fundraiser. A globe-trotting powerbroker, McCarrick liked to be called “Uncle Ted” by the young seminarians he courted.

Despite apparent common knowledge in church circles of his sexual behaviour, McCarrick rose up through the ranks, even serving as the spokesman for fellow U.S. bishops when they enacted a “zero tolerance” policy against sexually abusive priests in 2002.

One of his accusers, James Grein, the son of a family friend of McCarrick’s, testified to church officials that, among other abuses, McCarrick had repeatedly groped him during confession. He said the abuse, which went on for decades, began when he was 11.

“Today I am happy that the pope believed me,” Grein said in a statement issued through his lawyer. He expressed hope that McCarrick “will no longer be able to use the power of Jesus’ church to manipulate families and sexually abuse children.”

Grein said pressure must be put on U.S. state attorney generals and senators to change the statute of limitations for abuse cases.

“Hundreds of priests, bishops and cardinals are hiding behind man-made law,” he said.

The current archdiocese of Washington, D.C., where McCarrick was posted at the pinnacle of his career from 2001-2006, said it hoped that the Vatican decision “serves to help the healing process for survivors of abuse, as well as those who have experienced disappointment or disillusionment because of what former Archbishop McCarrick has done.”

Complaints were also made about McCarrick’s conduct in the New Jersey dioceses of Newark and Metuchen, where he previously served.

Francis himself became implicated in the decades-long McCarrick cover-up after a former Vatican ambassador to Washington accused the pope of rehabilitating the cardinal from sanctions imposed by Pope Benedict XVI despite being told of his penchant for young men.

Francis hasn’t responded to those claims but he ordered a limited Vatican investigation. The Vatican has acknowledged the outcome may produce evidence that mistakes were made and said Francis would “follow the path of truth, wherever it may lead.”

Sexual abuse scandals have threatened to taint the legacy of past papacies, including that of John Paul II, who has since been made a saint.

The Rev. Marcial Maciel, a pedophile, enjoyed John Paul II’s admiration for his success in spurring vocations and for inspiring generous financial donations.

Maciel’s predatory crimes against children were ignored for decades by the Vatican bureaucracy.