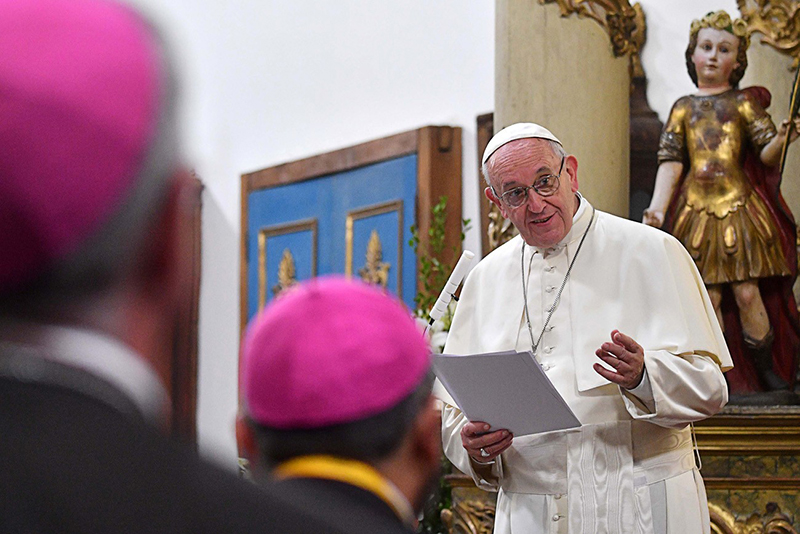 A bid by Belgium bishops to allow young married men to take the cloth has fallen flat at a Vatican meet — though Pope Francis is considering testing out the idea in the Amazon.

The suggestion of easing the rules on celibacy was raised by the Auxiliary Bishop of Brussels, Jean Kockerols, during a month-long meeting of the world’s bishops.

It appeared to fall on deaf ears – at least officially.

“There were no reactions” to that, or any of the “daring proposals” that made newspaper headlines during the synod, French bishop Emmanuel Gobillard told AFP.

The 330 or so clerics and lay people taking part in the talks, which end on Sunday, were tackling the thorny issue of how to make the Roman Catholic Church appeal to youngsters.

“I am disappointed by the lack of reaction. One bishop compared it to stalactites that take a long time to grow,” Kockerols told AFP.

“Numerous bishops sought me out during coffee breaks, saying ‘you are right, we should be heading in that direction,’ but I notice the subject was never looked into in the working groups,” he said.

The number of priests and nuns dropped sharply in 2016 in Europe – and the Americas to a lesser extent. The picture is rosier in Africa and Asia, according to the Fides Catholic agency.

As the Argentine pontiff has repeatedly said, there is no doctrinal prohibition on married men becoming priests, and therefore the discipline can be changed.

Saint Peter, the church’s first pope, had a mother-in-law, according to the bible.

Celibacy was imposed in the 11th century, possibly partly to prevent descendants of priests from inheriting church property.

But some within the church believe it is time to join many eastern rite Catholic Churches in permitting married men to take the cloth. Married Anglican priests keen to convert to Catholicism have already been welcomed over.

The Vatican’s number two man, Cardinal Pietro Parolin, suggested in an interview at the start of the synod that the church could “gradually look in depth” at the issue, while ruling out a “drastic change”.

Some 60 000 priests have given up their vocation over the past few decades, often to marry, according to a book on the topic presented a stone’s throw from the Vatican during the synod.

There were 414 000 Roman Catholic priests around the world in 2016. Some 1 000 of them are quitting each year, according to the book by Vatican expert Enzo Romeo.

While there are no official statistics on the number of married ex-priests, he estimates that there are around 8 000 of them in Italy alone.

“Priests’ emotions are still often a taboo subject, swept under the carpet at the heart of the church,” Romeo said.

The decision to leave the priesthood – despite the job security and free accommodation – usually happens after 13 years on the job or is sparked by a mid-life crisis, he says.

One of the former priests quoted in Romeo’s book says he quit not only because he fell in love, but also because he found it difficult to preach to others about the church’s moral stance on sexuality.

Pope Paul VI’s refusal to open the door to the use of the pill in the Swinging Sixties saw many priests abandon their calling.

“Celibacy is an extreme form of poverty which lumps those who practice it in with the loneliest people, the rejects,” one older cleric, defending his radical choice, told Romeo.

Pope Francis suggested in 2017 that the church “reflect” on the question of ordaining “viri probati”, married men of proven virtue, particularly in far-flung places where priests are thin on the ground.

The idea is likely to be on the table at a synod next year dedicated specially to the Amazon, an immense territory where clergy are scarce.

Sensing a possible shift in attitude, some 300 or so married, former priests in Italy sent a letter to Francis at the start of October offering to take up the cloth once more should he need them.