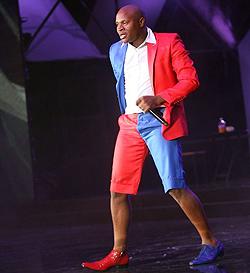 SOUTH African singer Dr Malinga will embark on his maiden European tour this weekend with gigs in Coventry, England, and Dublin, Ireland.
Malinga – star of DJ Vetkuk vs Vetkuk’s smash hit ‘Via Orlando’ – will perform live at Club Platinum in Coventry on Saturday before stopping at the Andrews Lane Theatre in Dublin on Sunday.
Promoter DJ Mkhukhwini of Kasiluv Productions said Dr Malinga, who will be accompanied by his dancers, arrives in London on Friday morning.
“All is set – the visas, work permits and flights. Dr Malinga is easily up there with the most sought-after artists in South Africa at this moment and this is a chance for his UK and Ireland fans to see him live,” Mkhukhwini said.
Dr Malinga has captivated South Africa with his kick dance routine which he calls “linga” since bursting onto the scene as a protégé of Kalawa Jazmee hitmaker, Oscar ‘Oskido’ Mdlongwa, barely three years ago.
He is yet to release an album but has featured on countless hits for other artists including Oskido’s ‘Jika’; Black Motion’s ‘Father To Be’; DJ Choice’s ‘Casanova’; DJ Fisherman’s ‘Izinja Zempilo’ and the 2012 anthem, ‘Via Orlando’.
Dr Malinga will release an album before the year is out, according to Mdlongwa.