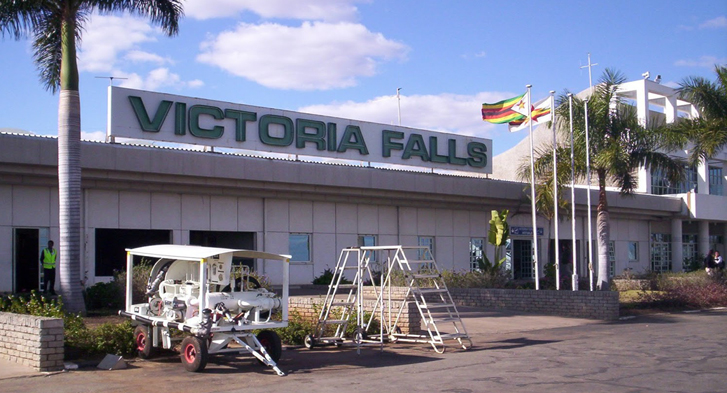 THE multi-million dollar refurbishment of Victoria Falls International Airport will now be completed in May next year, although some facilities will become operational next month, the Civil Aviation Authority of Zimbabwe said on Thursday.
CAAZ initiated the $150 million airport expansion project in February 2013 to boost tourism and its aircraft handling capacity from 500, 000 per annum to 1, 5 million as it seeks to make Victoria Falls the regional aviation hub.
However, the facility funded by China’s Exim Bank through a concessionary loan facility has missed a number of deadlines.
In an update to the visiting Chinese Deputy Minister of Commerce Zhang Xiangchen, who is in the country to inspect China-funded capital projects, CAAZ officials said completion is scheduled for May 16 next year but the airport will start using the new facilities on November 23.
CAAZ said new 4km and 60 metres wide runway, which will accommodate wide bodied aircraft such as B747, B777, Airbus A340 and A380 among others, was now nearly complete.
“Overall progress on the airside works is 89 percent complete. On the runway, installation of lights is almost complete at 98 percent while marking is in progress,” said CAAZ in the progress report.
Expansion work also includes expansion of the existing runway, construction of a new terminal building, control tower which is now 92 percent complete, and car park.
A new fire station, sewer ponds and water tank are also being built at the airport and are in various stages of completion.
China Jiangsu is carrying out the construction work.
Once completed, the new look airport will provide space for “standard and exclusive food beverages facilities, lounges, six landside shops, seven offices for lease and seven shops on the airside” in line with international aviation standards, CAAZ added.
CAAZ is already marketing the new facility to lure new airlines to cushion the existing ones which are Air Zimbabwe, Fly Africa, South Africa Airways, Comair and Air Namibia.
Xiangchen was scheduled to meet with transport minister Joram Gumbo on Thursday to discuss a number of infrastructural projects.Advertisement