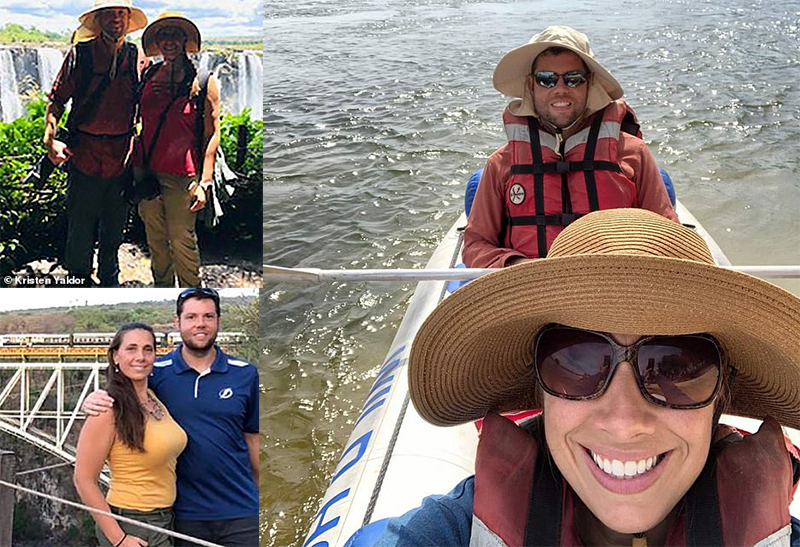 Travel nightmare: Ryan and Kristen Yaldor were floating down the Zambezi River Saturday when an angry hippo protecting her calf overturned their canoe and bit the woman on her right leg, breaking her femur (pictured in the canoe just before the attack)
Spread This News

US: KRISTEN and Ryan Yaldor planned an elaborate vacation to South Africa and Zimbabwe complete with safaris, a drum and dinner show, and a canoe trip near Victoria Falls to celebrate Kristen’s 37th birthday.

What the Odessa couple didn’t anticipate was the protective mother hippopotamus and her young calf hiding under the water as they floated down the Zambezi River with two tour guides.

Before they could react, the mother hippo swam under the couple’s canoe and threw it into the air. Ryan was able to swim to a nearby island, but the multi-tonne animal dragged Kristen under the water, its jaws snapping down on her leg and breaking her femur.

Kristen was able to escape, but it would be another hour before a medical helicopter arrived, Ryan said, and 13 more before she arrived at a hospital in South Africa. She remains in intensive care.

Hippos are notoriously aggressive animals in the water and are protective of their young.

Martine Yaldor said her daughter-in-law was lucky the animal’s huge incisors missed her thigh, instead clamping her leg between its flatter grinding teeth.

“If one of those (incisor) teeth hit her femoral artery, we would probably be planning a funeral today,” Martine said. “By all accounts, she was incredibly lucky.”

Martine, a South Africa native, forwarded emails to the Tampa Bay Times that include Ryan’s perspective and information from the CEO of the tour company, Wild Horizons.

The accounts differ in their descriptions of whether Kristen followed directions to swim away from the enraged mother hippo, the tour guide’s ability to call for help and the time it took to transport Kristen to a hospital equipped to treat her injuries.

“We all know there are always risks involved when you interact with wildlife,” Martine said. “But the facts here are so distorted and misstated. They actually did not do anything frivolous at all.”

The couple, who both work at PBX-Change, a phone and Internet company their family owns in Tampa, wanted to plan something for Kristen’s birthday. They decided on a canoe safari down the Zambezi River. They found Wild Horizons on Viator.com, a popular travel site.

“Calm waters and stable craft make this tour beginner-friendly,” the tour description says. In an email, Ryan said the couple was never warned about the calf or unsafe conditions. “We had no idea there was a baby,” Ryan wrote Monday. “We were just told, ‘Hippos ahead on the right, let’s move to the left.’”

An account from Wild Horizons, as relayed by Ryan’s uncle, said the guide shouted instructions for the Americans to swim to the island while he tried to distract the hippo. That’s when Kristen was dragged under.

But Ryan said Kristen was thrown forward, right toward the angry animal. He also said the guide’s radio and cell phone didn’t work, which delayed care.

“Kristen was pulled under as soon as she hit the water,” Ryan wrote. “She had no opportunity to swim to shore.”

Martine criticised the tour company for not warning participants of the risks or canceling tours during unsafe conditions when animals might be more volatile, such as mating season.

“This is a very unfortunate incident that can happen in the wild with animals when we’re on their territory,” Martine said.

“But the people that provided this opportunity weren’t properly prepared…,” Martine said. “They need to have the courage of convictions to say, ‘Sorry, it’s not safe today.’”