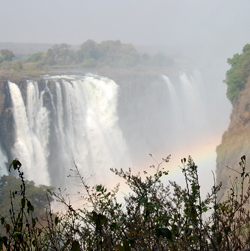 VICTORIA FALLS’s hospitality industry is set for improved fortunes after recording an eight percent increase in hotel occupancy during the first two months of 2017.
Ross Kennedy, chief executive officer of one of Zimbabwe’s largest leisure groups Africa Albida Tourism, said the year looks promising for the hotel industry considering that last year hotel room occupancy failed to reach 50 percent mark.
“Last year the town’s accommodation occupancy didn’t reach 50 percent but to date, at the end of February 2017, we have seen 8 percent growth in occupancy over the same period, which is a healthy start and sets a good benchmark for the year ahead,” said Kennedy.
He said there is a total of 1, 125 hotel rooms in Victoria Falls which are measured every night, comprising 11 properties ranging from 6 rooms to 290 rooms each.
“In 2016 these properties between them averaged 48.6 percent occupancy, with some doing very well and some much less,” said Kennedy.
“There are an estimated further 600 rooms in the destination between camps, bed and breakfast, self catering, private lodges and other accommodation options. We have no tracking on those but one can draw a fair assumption that they likely track the same trend.”
Kennedy said more hotel rooms are needed to match growing aviation trends where an additional 80,000 tourists are expected to come into the resort town annually, brought by three of Africa’s largest airlines which now fly to Victoria Falls.
“This tells the story that the destination has clear capacity for growth and thus the increased airlift into Victoria Falls Airport in 2017 is not only very welcome but also important for tourism growth.”
This comes after South African Airways launched an Airbus A330-200 flight into Victoria Falls last week, while Ethiopian Airlines and Kenyan Airways have announced interest to introduce direct flights into the resort town.
Last year, Zimbabwe commissioned the Victoria Falls international airport after a $150 million revamp funded by China, to expand its capacity to handle additional traffic and bigger aircraft.
“There is capacity in the industry, let’s all use our networks around the world to ensure people know about the destination and we should ensure as that we invest in more rooms,’ added Kennedy.Advertisement