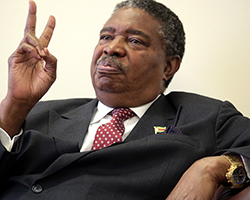 ON 4 February 2016, at a hastily organized rally for the First Lady, Amai Grace Mugabe, in Mashonaland Central Province, at Kanyemba Secondary School to be precise, Vice President Phelekezela Mphoko, made bizarre, reckless and dire-tribe remarks that surprised many in the nation.
The remarks, coming barely 36 hours after another wayward member of the discredited and cantankerous G-40 grouping, Sarah Mahoka, had made unprovoked, unprecedented and shameless public ridicule of the nation’s Vice President, Emmerson Mnangagwa in the presence of President Mugabe, left Zimbabweans wondering whether the wheels of discipline in the Zanu PF Party machinery had finally come off.
In typical Mphoko trademark where talking takes precedence over thinking, the Vice President wasted no time when he took to the podium. He told all and sundry, that President Mugabe would not be succeeded by a Karanga. This was a shocking remark, but a revealing one though. Mphoko went further to reassure a rather lethargic crowd that they should go to sleep peacefully knowing full well that the notion of a Karanga take over after President Mugabe was a far-fetched dream that was not realisable.
If anyone had any lingering doubts about what Mphoko meant by his vaguely presented address, the vagueness cleared off when he, together with his close associates, which included the First Lady, Grace Mugabe, Saviour Kasukuwere, Jonathan Moyo, Sarah Mahoka and Patrick Zhuwao took to the floor, dancing to the ‘Zezurus are unconquerable’ lyrics that were being played. The prevailing atmosphere at the rally clearly pointed to the reaffirmation of what Mphoko had underscored in his address. It was like celebrating ethnic tensions.
While one understands the shameless and unrestrained emotional outburst directed at V.P. Mnangagwa by that political neurotic, the primary school drop-out called Mahoka, whose wayward behaviour typifies that of yesteryear’s she-been queens, notorious for picking quarrels with opponents in public, it is difficult to understand V.P. Mphoko’s mental balance when he makes such outrageous and senseless remarks particularly in the full knowledge that one of the contestants in the Presidential succession race is a Karanga.
While Mphoko was undoubtedly singing for his supper, he also confirmed what we had long suspected, that he was indeed a stranger to the history of ethnic conflicts that has ravaged many nations particularly in Africa. He has no appreciation whatsoever, of the devastating effects of civil wars in Nigeria, Rwanda, Burundi, the D.R.C and southern Sudan to name just but a few.Advertisement

It is unfortunate; that a whole Vice President of a nation, a senior government official who is supposed to lead by example, displays such brazen levels of ignorance, to fundamental issues such as tribal conflicts, particularly so, when Africa is littered with skulls of men, women and children whose lives were prematurely terminated on account of civil wars caused by reckless leaders like Mphoko. We must, without any further delay, remind this man about the dangers of playing ethnic politics, particularly at this juncture when Zanu PF, the governing political party in the nation, is literally burning.
Nature has it that any human being has the potential to start a war, which by its very nature, is blind and will consume anything that stands in its way. Mphoko, who is behaving like an agent of doom and despair, must be stopped now or he will plunge this nation into a civil war.