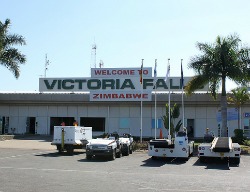 VICTORIA Falls Airport is set to undergo a US$200 million upgrade in a development expected to enable international airlines to fly direct to the resort town.
The project will be developed over two years with funding provided by China’s the Export-Import Bank, officials confirmed this week.
Zhu Haifeng, a representative of the Jiangsu International Economic and Technical Cooperation Group, which is managing the revamp, said the project would, among other things, see the expansion of the airport’s runway as well as the construction of a new terminal.
Civil Aviation Authority of Zimbabwe chief executive, David Chiwota, said the upgrade would enable the airport’s runway to accommodate wide-body aircraft like BOEING B747-400s and Airbus A340s with the passenger handling capacity increased from 500,000 to 1.5 million annually.
He added that global carriers such as KLM and Emirates had already expressed intentions to launch long-haul international flights to the resort, instead of commuting via Harare.
Victoria Falls is the country’s premium attraction but tourist inflows have, over the recent years, increasingly been undermined by transportation bottlenecks; it is more than ten hours to drive from Harare and the tiny Victoria Falls airport serves only small regional jets from Harare and Johannesburg.
Authorities expect tourism help boost an economy now largely sustained by mining and agriculture.
Zimbabwe and Zambia will co-host the United Nations World Tourism Organisation (UNWTO) summit this August at Victoria Falls.
Organisers say the meeting will be a rare chance to showcase the country’s tourism.Advertisement