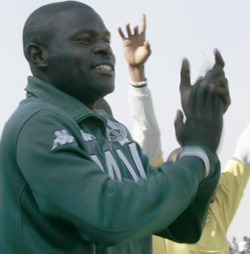 NEWLY crowned PSL champions Caps United have resolved to give the players and the technical staff $50, 000 to share from the total $100, 000 prize money.
For winning the title, the club will get $100, 000 from Delta Beverages who sponsor the league through their Castle Lager Brand.
A Caps United senior player, speaking on condition of anonymity, confirmed to NewZimbabwe.com that the victorious squad will share $ 50, 000 as a reward for winning the league title.
“We are all happy with the decision by the club. We worked very hard and we deserve to enjoy. It has been a long wait and the fact that we managed to do this under very difficult circumstances shows we have got a strong character as a team,” said the player.
The champions are expected to parade their trophy in Harare on Saturday.
Caps players have often boycotted training for the better part of the season demanding payment of outstanding salaries and allowances. But they defied odds and went all the way to win the championship for the first time in 11 years.
The Green Machine went into the penultimate match against Chapungu leading the table with 57 points, two ahead of FC Platinum and needed a victory of any margin to be crowned champions of Zimbabwean football. And they did just that with Simba Nhivi scoring the only goal of the match.
Despite closest challengers FC Platinum crushing Tsholotsho 3-0, Lloyd Chitembwe and his men were the eventual champions as they ended the season with 63 points, two ahead of ahead of FC Platinum.
The Green Machine last won the championship under Charles Mhlauri who led them to back to back championships in 2004 and 2005.
It is also Caps United coach Lloyd Chitembwe’s maiden league title since he started his coaching career. The Caps United gaffer also went into the club history as the coach to have won the league title as a player and coach having been part of the great Caps United squad of 1996 that won the championship under Steve Kwashi.
Chitembwe also played a pivotal role at the Green Machine then under the guidance of Charles Mhlauri.
He has also finished the season without tasting a defeat at the National Sports Stadium which he had turned into a virtual fortress since his appointment as coach in September last year.
In other matches played on Saturday, Highlanders thrashed Hwange 3-0 despite fielding a largely youthful side while Dynamos were edged 3-2 by Chicken Inn at Rufaro while ZPC Kariba signed off with a 1-0 win over Border Strikers.Advertisement