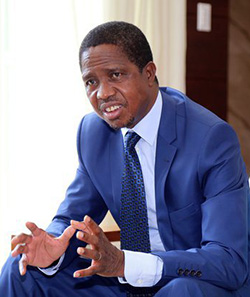 LUSAKA: Zambia’s opposition party the Forum for Democracy and Development (FDD) has blasted President Edgar Lungu after a video of him dancing at the Zambia Air Force (ZAF) annual ball in Lusaka emerged.
FDD spokesperson Antonio Mwanza told The Post that president Lungu had shown no “seriousness” on the affairs of the country as he failed to provide leadership despite the country’s economic challenges.
“… It is clear that we have a dancing, playing president who does not care about what is going on in the lives of the people, Mwanza was quoted as saying.”
He said Lungu spent most of his time flying around the world to attend to unimportant events while the people of Zambia were struggling.
“This is the man who has spent most of his time in office either flying around, attending to useless banquets such as independence ceremonies in Mozambique and Malawi or going round the country dancing around at different venues.
“This is the man who has spent most of his time going round politicking instead of providing leadership and direction to the people of Zambia, Mwanza said.”
Watch the video below: