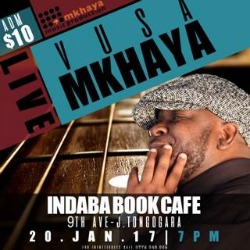 Vusa Mkhaya is perhaps one of the most listened to Zimbabwean musicians based in the diaspora. His hit, Manyanyatha, is receiving positive reviews and limitless airplay. Here, he answers our (your?) questions.
Who is Vusa Mkhaya?
I am Vusumuzi Ndlovu and I was born and raised in Bulawayo, Zimbabwe
Who influenced your music carrier?
Maskandi music, Isicathamiya, Ndebele traditional songs and church hymns that we sang at Sunday school were my early influences in music.
What influences your song writing now?
Day to day activities, my upbringing, people and places I travel to.
Do you write your own music and lyrics and what system do you use to compose?
I write my own music and lyrics, but I won’t say no if I get offers from other composers or lyricists. If the genre is good and their lyrics are clean why not?
How many albums have you recorded so far?
Manyanyatha (2016), The Spirit Of Ubuntu (2006) Vocalism (2012). I have recorded and worked on more than 50 albums as a background vocalist for other bands
Tell us about Manyanyatha? Who is or was he and why sing about him? What message are you sending across?
Manyanyatha was a famous Maskanda musician in the late 1970s to early 80s. My family tells me that every time a song by Manyanyatha played on radio, I would stand up and dance and sing along to all the lyrics. I was given the name Manyanyatha by my uncle who always cheered me on when I was dancing and singing to Manyanyatha songs. On this song I talk about those times and also remember my family members who, alongside my uncle, encouraged me to do what I do now.
I understand you are based in Austria? How did you end up in Austria? Lured by a particular artist or some culture?
Yes, I am based in Austria. After touring Austria with the Imbube group, Insingizi, we got an opportunity to attend a music conservatorium to further our music knowledge by learning music theory and classic instruments. We took the offer and, as they say, the rest is history.
What should we expect from you? Any upcoming projects?Advertisement

We will be performing in Bulawayo on the 20th of January, 2017 for the first time under the name Vusa Mkhaya and I am excited. We will perform songs from the new Album Umyanyatha and also from our two previous albums The Spirit Of Ubuntu and Vocalism.
What challenges are you facing at the moment? These days there are a lot of musicians because of the vast opportunities offered by technology and the internet. That surely must come with challenges?
Piracy is the first challenge. Everyone has access to Whatsapp or internet these days. One person can buy your song on itunes and share it on WhatsApp groups etc for free. The other challenge is the birth of overnight producers who are there for the money and not the quality of music.
Growing up in Bulawayo did you ever think you were going to be a musician? Or you had other dreams like playing for Highlanders, for example?
I knew at an early age that I wanted to be on stage or on radio. I was always fascinated by the power people on radio had. We used to listen to Sakhelene Zinini play on Radio 2 and that show had a great influence in our community. I always wanted to be on it; my wish was to be listened to by people in their homes. The musician, Manyanyatha, was also a great influence even though I was young to fully understand what his music was doing to me. I was told of my fascination with his (Manyanyatha) music by my family.
Some musicians like Joseph Shabalala have spoken about how they sometimes dream of certain songs in the middle of the night? Does that ever happen to you?
Sometimes topics or themes come in the form of a dream to me. There are times when I had to wake up and start writing. I prefer writing or composing at night when it is quiet and there is no movement or ringing phones etc.
As you have lived in Austria one would expect that one day you will do a song in your hosts’ language!
On my previous CD Vocalism, I recorded an Austrian traditional song and sang it in German. In future, I will record a full album in German as a thank you to the music and life lessons I learned here.
How does being far away from home influence your music, lyrics and stage performances?
I now consider myself a global or world citizen; exposure to other cultures and traditions has changed the way I view the world. Now I have a lot of topics to write about and also my stage performance has improved because of the various live performances I am exposed to from artists we meet and sometimes collaborate with at various festivals around the world.
One thing that I want to add is that I also compose music (soundtracks) for film and documentaries. Some of my compositions have been featured on the BBC (UK), PBS (USA) ORF (Austria) ARD (Germany) ZDF (Germany).