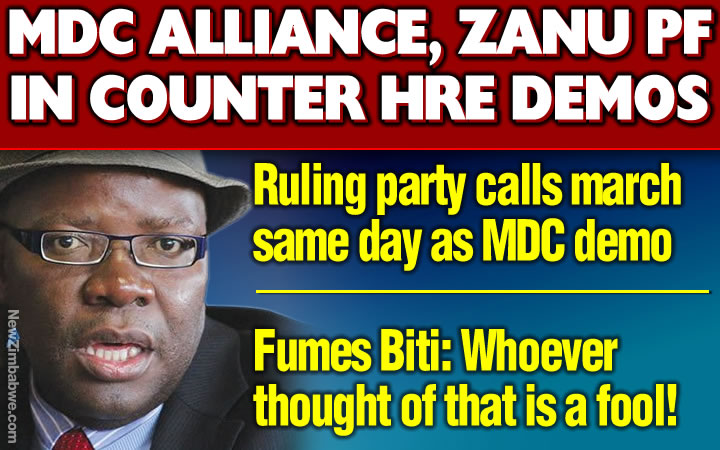 ZANU PF has called for a solidarity march for its Presidential candidate, Emmerson Mnangagwa Tuesday, setting the stage for potentially bloody clashes with MDC Alliance rivals who had earlier called for a march for same period to press for electoral reforms.

MDC Alliance co-principal Tendai Biti was left fuming on Sunday over what he felt was an attempt to frustrate the opposition front from genuinely demanding poll reforms.

Zanu PF rivals are adamant the current poll setup in terms of legislation and processes was skewed in the ruling party’s favour even as the country nears watershed elections set for July 30.

In attempts to force a change of the status quo, the MDC-T and its coalition partners have called for a march in central Harare which is set to pass through Munhumutapa Building, along Samora Machel Avenue, where Mnangagwa’s offices are domiciled.

During the protest march, the opposition will leave a petition at the Zimbabwe Electoral Commission offices with a list of its demands.

But in a surprise move on Sunday, the Zanu PF youth league circulated a message on social media calling on its Harare followers to attend a Mnangagwa solidarity march at the same time.

“All members of the youth league from all levels are invited to attend a march in solidarity with President ED Mnangagwa’s call for peaceful elections and No to Violence.

“We are the vanguard of the party so we are 100% behind our President ED Mnangagwa,” read the message attributed to party youth secretary for administration Kudakwashe Masamvi.

“We know nothing about the MDC march. What we concern ourselves about is our own march and have done the necessary bookings for it,” he said.

However, Biti said the apparent Zanu PF decision to counter the MDC Alliance meeting would lead to violence.

“Whoever is allowing that to happen is crazy because if the two groups meet, there would be violence. Whoever thought of that is a fool. How does that work!” he said.

The PDP leader said they are going ahead with the march and have given the police some notification about it.

“We have complied with the law and we don’t need (police) clearance,” he said.

Home Affairs Minister Obert Mpofu Friday warned the opposition against targeting the President’s offices during their march saying there was no peaceful march that places the President’s security at risk.

“He has to show us a section of the Public Order and Security Act which says you can’t march along Samora Machel Avenue,” he said.