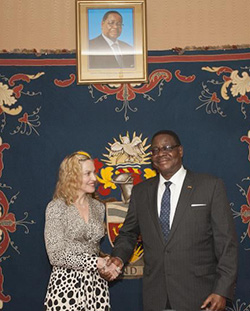 POP diva Madonna met Malawi’s new president Friday after her VIP status was restored in the country where she adopted two children but then fell foul of the former government.
President Peter Mutharika commended Madonna for her charity work in the poor southern African nation, saying “my government has always been grateful for the passion Madonna has for this country.”
It was Madonna’s first visit in more than a year after she was stripped of her VIP status by former president Joyce Banda amid controversy over the cancellation of her plans for an academy for girls.
“Her VIP status has been restored,” presidential press secretary Frederick Ndala told AFP.
Mutharika said the singer’s passion was directed “especially towards addressing poverty and hardships endured by Malawi’s orphans and vulnerable children through her charity Raising Malawi”.
Madonna has adopted two children – Mercy James and David Banda –  from the country, which officially has more than a million orphans and vulnerable children.
“During our discussion, Madonna displayed much commitment in helping to build more classrooms in schools across Malawi,” said Mutharika, who described himself as “a fan of her music”.
He thanked her for honouring her promise to bring her two adopted children along for the week-long visit.
The singer did not speak to the assembled journalists and was whisked away by her security detail soon after meeting the president at Kamuzu Palace in the administrative capital Lilongwe.
Madonna lost favour with the previous government after cancelling the construction of a $15 million academy which was meant to offer 500 scholarships to girls from poor backgrounds.
The academy was mired in allegations of mismanagement and the project was replaced by plans to build schools in order to reach more children.Advertisement