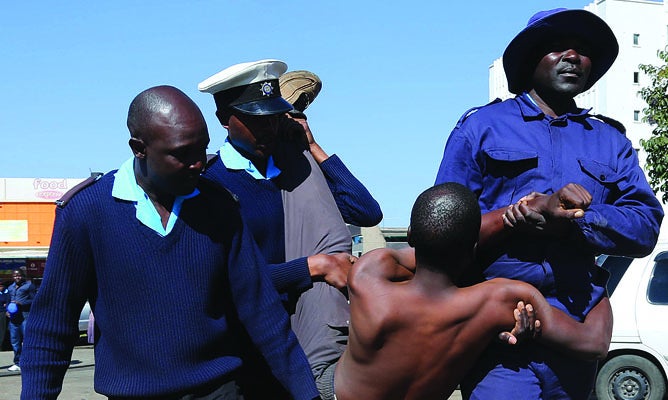 File image: A vendor captured during a raid
Spread This News

THE Vendors Initiative for Social and Economic Transformation (VISET) has demanded a stop to the current blitz against illegal street vendors by both state and municipal police saying rights of street traders are being violated in the operation.

In a statement weekend, VISET said the raids have seen constant harassment on their members.

The Harare City Council has joined forces with state police to rid the CBD of street vendors.

However, the blitz has been met with strong resentment by the affected group which claims harassment and theft by law enforcement agents.

VISET said in a statement it was condemning “in the strongest of terms” the move by the authorities to forcibly remove traders from the streets without putting enough vending infrastructure to cater for the needs of those who eke out a living in the open.

“This latest clampdown comes at a time when VISET has been intensifying efforts to engage with the City fathers with the aim of finding a lasting solution to the issue of the shortage of operating spaces in Harare,” said the group.

“…We call upon the authorities to stop this attack on livelihoods.”

Added the vendors group, “We further call upon the City Fathers to respect the by-laws by ensuring that they build sufficient operating spaces that respond to the increase in the number of Informal Traders.

“Street Vendors are not criminals but ordinary people seeking livelihoods and must be allowed to fend for their families especially when the government has failed to provide jobs in the economy.”

The group also said the operation was infringing on its members’ rights.

“We also note that there is an undeclared curfew which is infringing on the right to movement and liberty of our members. This has to be stopped.

“We further call for the unconditional release of our members who were arrested in Harare’s CBD and also that their goods arbitrarily confiscated be returned without any preconditions.”