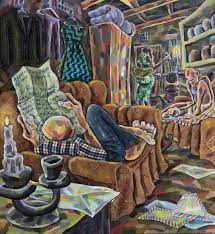 LIFE during a Covid-19 isolation can be mundane for real.

It means spending hours solo and repeating the same routines over and over.

Not for visual artist Tara Wallace however, whose exhilarating artworks reveal that one can still live their life fully despite being condemned to isolation.

The artworks were showcased during her recent pop-up exhibition at Tsoko Gallery in Harare.

For Wallace, painting is a hobby that she started to take seriously after the outbreak of the Covid-19 pandemic.

Her passion has resulted in an exhibition of a series of portraits, landscapes and still images, done with oil paint on a panel curated by Merilyn Mushakwe.

The exhibition takes its title from the installation — A Close-up View of a Cloud — which is made up of long balloons twisted into the shape of miniature poodles and suspended from the ceiling.

It is as if by taking a close look at the dark cloud of Covid-19, the artist chose to meditate on the silver lining behind it.

Mounted in small man-made frames, the works draw viewers closer in a way that amplifies observation.

The work is an exciting proposition on how we look at things and what we see. It alludes to insight gained by proximity to the subject, an idea that is reflected in the hanging of the paintings.

The audience is treated to exotic landscapes, botanical arrangements, and characters from street  sides and marketplaces.

While Zimbabwe and the rest of the world continue to face the harsh effects of the pandemic, idyllic scenes depicted in the paintings may appear like escapism.

Mushakwe says the purpose of the exhibition was to provide relief from a generally bleak outlook, by shifting focus to something positive.

The project might be seen as an indication of class privilege in how the pandemic has impacted people.

This could be argued with reference to the poignant Lockdown 2.0 in which the ubiquitous poodle sits on a luxurious armchair staring out of the frame in boredom.

The comfortable and opulent surroundings of the lounge are a far cry from what the majority of Zimbabweans were experiencing during this period.

As the same breed of canine is featured in several other paintings, maybe it’s just a casual observation by a dog lover.

Wallace, who used to work on a yacht, reveals nostalgia for distant places and people.

Her exotic landscapes, and portraits whose foreign emotions are masked behind knockoff Ray-Bans, reflect this.

Her intimate still images come from abundant time of introspection.

Up close, the paintings featured in the exhibition are an immersive and reflective body of work.