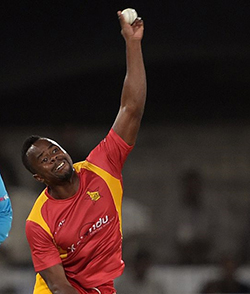 HARARE: Zimbabwe fast bowler Brian Vitori has been suspended from bowling in international cricket for 12 months by the International Cricket Council (ICC) after an independent assessment found his bowling action to be `illegal`.
Vitori underwent assessment at the University of Pretoria in South Africa, where some of his deliveries were found to be exceeding the 15 degrees level of tolerance permitted under the regulations.
The match officials, who handed the report to the Zimbabwe team, cited doubts about the legality of Vitori’s deliveries in the finals of the tri-series, which also featured West Indies. It was for the second time in the space of two years that his action was deemed illegal.
The 26-year-old had earlier been suspended from bowling in January 2016 but was permitted to resume bowling in June after remedial work and a subsequent reassessment.
The Zimbabwe pacer, however, could appeal against “any procedural aspect” of the latest test that led to his suspension, but he could not appeal the ICC for another assessment of his action before 12 months, ESPNcricinfo reported.
Vitori has appeared in a total of four Tests, 20 ODIs and 11 T20Is since making his debut in August 2011.
The tri-series final against Sri Lanka in November, when Vitori finished with the figures of three for 52, was his first international match since he was reported for a suspect bowling action for the first time in January this year.Advertisement