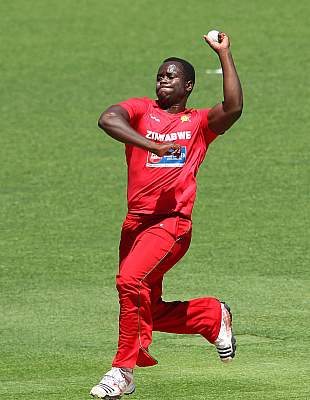 BRIAN Vitori, the left-arm pacer, could make a return to competitive cricket this Friday after six months on the sidelines.
Vitori, who was suspended for an illegal bowling action in February, and was retested and cleared last month, has been included in Zimbabwe A’s 16-man squad to play South Africa A in a first-class match in Bulawayo, and could lead the attack alongside Shingi Masakadza.
Vitori will likely be competing for a place with Victor Nyauchi, who took three wickets in the Harare game that concluded on Tuesday, or Njabulo Ncube, who is one of two Bulawayo-based players that have been included in the squad.
Sean Williams is the other, and will add both batting and bowling depth to the squad, as Zimbabwe prepare for their two-Test series against New Zealand, which will be played at the Queens Sports Club later this month.
Zimbabwe have made six changes to the group that played in Harare, mostly with a view to add international experience to their squad.
Williams is joined by batsmen Craig Ervine and Tarisai Musakanda, legspinner Natsai M’shangwe, and seamers Njabulo Ncube and Vitori. John Nyumbu, Gerald Alisini and Richard Muzhange will miss out.
Vitori has not played any cricket since Zimbabwe’s domestic T20 competition in February, a month after he was cited for a suspect bowling action in a match against Bangladesh in Khulna.
Vitori underwent testing in Chennai and the results revealed all of his deliveries exceeded the 15-degree limit. He was retested in Pretoria in June and cleared.
He remains one of Zimbabwe’s most promising prospects, but his career has been blighted by injuries, including a stress fracture, and lengthy gaps in game time.
However, with Zimbabwe’s talent pool searching for depth, he may provide some answers ahead of a busier than usual home summer.
Zimbabwe are scheduled to play two Tests against New Zealand and the same number against Sri Lanka later in the year.Advertisement