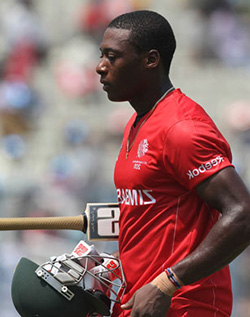 CHAMU Chibhaba’s batting was the main positive to come out of Zimbabwe’s ODI series against India. He was their top-scorer, with 157 runs in three innings, including two half-centuries. Indeed, Chibhabha is in the midst of a rich vein of form this year.
Sadly for Zimbabwe, the same cannot be said for his opening partner, Vusi Sibanda, who added 22 runs in two innings before he was dropped for the final game.
Chibhabha and Sibanda’s trajectories appear to be heading in opposite directions, and it’s important to try to understand why.
Sibanda is in possession of perhaps the finest – and certainly most aesthetically pleasing – technique in Zimbabwean cricket. When in full flow, his strokeplay is a thing of crisp, almost poetic beauty. Yet he has never been able to make the most of it with any long-term consistency on the international stage.
Chibhabha, on the other hand, has a more homespun, grafting style, yet in nine matches in 2015, he’s scored 393 runs at 49.12 with a high score of 99 against Pakistan in the second ODI at Lahore.
Narrowed down to this season, his numbers get even more impressive, with his batting average inflating to 73.75 from five innings, along with five wickets at 28.00.
“A lot of the success I’ve had lately, it’s more of my attitude and mental approach to the game,” he said during the series. “Not to worry about technique or anything, just backing myself to execute.”
Perhaps Sibanda’s problem is a mental one.
It’s certainly hard to pick out a particular blind spot in Sibanda’s technique. By reputation, he tends to get out going for the pull, but the stroke is also a very productive one, and one that he plays often.
So it stands to reason that he would get out playing it fairly often too. Batsmen who don’t pull don’t get out pulling, but also cut down on their run-scoring options.
An opening batsman, perhaps more than any other member of the top order, faces an acute barrage of technical and psychological challenges at the crease. These are heightened by the pressure to score quickly against the new ball, and especially the Duke ball, in limited overs cricket.
An opening batsmen has got to go about his game in a unique way. He’s also got to be managed very sensitively, given the high risk of failure that is inherent in the position.Advertisement

Success as an opener is built around a clear head, free from worry and distraction. Chibhabha’s words suggest he is in that space right now.
Is Sibanda? For large swathes of his career, it has seemed that he is never more than a couple of failures away from being dropped.
He debuted, probably too early, as a 20-year-old in 2003 – before Prosper Utseya, Elton Chigumbura or Brendan Taylor, yet those three have played many more ODIs in the interim, with Sibanda in and out of the side.
It wasn’t until 2011 that he seemed to blossom, with an average of 37.45 from 11 matches, and two half-centuries against both Pakistan and Bangladesh.
He didn’t play any ODIs in 2012, but in 2013 it continued to seem as though he had come to terms with the challenges of opening in limited-overs cricket, as he recorded fifties against West Indies, Pakistan, and India, and guided Zimbabwe to their first international series win since 2011 with a century against Bangladesh.
But even in that series, he had been dropped for the first match, and when he was brought back he had to make the most of the opportunity.
“It [the hundred] means a lot to me,” Sibanda said after the game.
“All the hard work that I have put in, it is finally paying off. I was dropped from the team in the first ODI so it wasn’t easy to come back, but I grabbed whatever chance I got.
“I hope this is the beginning of more hundreds to come. I will continue to work hard on my game.”
Unfortunately, Sibanda’s success did not continue. He averaged just 9.60 in 2014, from eight ODI innings.
Steve Mangongo’s ‘perform or be dropped’ selection criteria cannot have helped his mindset during this period.
But in five innings this year, with Dav Whatmore in charge, he has averaged 21.50, with three scores in the 20s and a top effort of 28 not out in the washed out third ODI against Pakistan in May.
He will continue to remain in the frame for selection as Zimbabwe don’t have the resources to discard him outright, but as an opening batsman he will also continue to be haunted by the spectre of failure.
While consistency of selection would help, it might be worth asking if Sibanda is even in the right position, and whether he should really be opening the batting at all.
In the Sydney Shires First Grade competition in 2006 he batted at no. 3 for Strathfield, and registered two centuries and a 96 in four games.
Five years later he was back playing First Grade Cricket for Eastern Suburbs, but he was asked to open and managed a top score of 86, with no other fifties and three scores between 24 and 28, displaying a general symmetry with his returns opening the batting in international limited-overs cricket.
In 2013 he played for Kalabagan Cricket Academy in the Dhaka Premier Division 50-over tournament in Bangladesh, scratching together 40 runs in five innings as an opener.
Of Sibanda’s 24 centuries across all forms of professional cricket, eight have been made as an opening batsman. His most productive position has been No. 4, from where he has made ten hundreds. He has also made five hundreds at no. 3, and one at no. 5.
Chibhabha, younger by three years and not quite as prolific, with only six hundreds, has made three of those as an opener, and three at No. 3. The difference is that Chibhabha virtually always opens or bats at first drop in domestic cricket. Sibanda appears far more comfortable at No. 4.
If Sibanda’s international future is as an opener, one of the hardest jobs in cricket, then he has got to be very carefully managed. He has got to learn to free himself from the worries of failure.
If not, then all that will remain is unfulfilled potential, his rasping, sure-footed cover drives and dauntless pull shots reflected only in the dark mirror of all that could have been.
Liam Brickhill is a freelance journalist based in Cape Town.