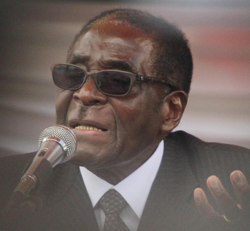 LAST week newzimbabwe.com published an article titled “President Mugabe’s Balance Sheet,” by one Dinizulu Mbiko Macaphulana, a self-professed intellectual whose wide reading is far less questionable than his analysis.
There are points in Macaphulana’s essay that I will agree with, and there are some assertions I will question, strictly from a phrenic perspective, and that includes some arguments that do not even rise to the level of nonsense; like the suggestion that Robert Mugabe, Kwame Nkrumah and Idi Amin all fall in the same class of villainous notoriety.
Macaphulana starts by writing about Robert Mugabe’s “political personality,” and his “political project,” and says the two are “bound to arrest the attention of thinkers and writers for a long time to come.”
Robert Mugabe is not just one of the founding fathers of post-colonial African independence. He is a principled ideologist whose policies have created the legacy of Mugabeism, and like every other lasting ideologist, there will be admirers and disputants to his ideas. One sure fact is that Mugabeism will be immortalised by both sides of the divide, and as Macaphulana writes, thinkers and writers will be seized with Mugabeism for a very long time to come, far and beyond the man’s death.
Macaphulana correctly says reactions to Mugabe’s legacy “range from worship to caricature,” but he does not realise that what is idolised by some, and abhorred by others is not Robert Mugabe the political person, but the revolutionary principles and ideas for which the man stands.
Indeed to his critics Robert Mugabe is a detestable villain who painstakingly carries an image of a monster so immune to mortality, and his long life becomes a bitter pill to swallow. Yet for his many admirers in Africa and across the world Mugabe is the arbiter of social justice, the voice of the oppressed, the ambassador of equality in international affairs, and the darling brave one who knows how best to tell bullish supremacist Westerners that slavery and colonial dominance are dead and buried in the world of the modern day African, dead like white occupation of farmlands in Zimbabwe.
As for Zimbabweans, the consensus on Mugabe’s land reform policy is certainly unquestionable. Even those that have ferocious political differences with Mugabe, to the extent that they publicly pray for his death; they stand united with his supporters in saying that the land reform policy is a noble idea, and that there will never be a reversal of land redistribution.Advertisement