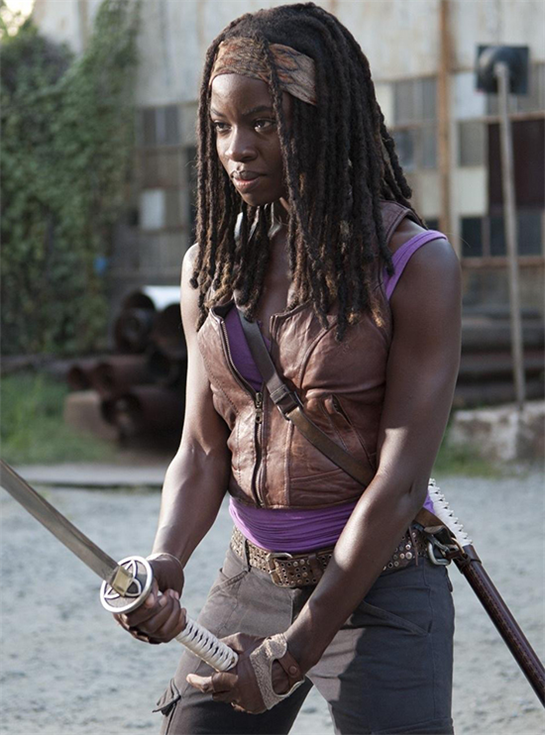 IF YOU’RE a fan of The Walking Dead, which has launched the second half of its fifth season, you’re accustomed to seeing Danai Gurira use her lethal katana to behead an assortment of zombies.
Lately, Gurira has been spending her time cutting pages of a script, since her latest play, Familiar, opened at the Yale Repertory Theatre in New Haven, Conn.
It’s ironic that Gurira became famous as a character who didn’t speak for a while, because she’s a literate and eloquent playwright, working in a wide assortment of styles.
“Since I said so little for so long on camera in The Walking Dead, I was able to use language as my personal tool of empowerment,” says Gurira. “How I speak and what I say matters a great deal.”
That’s something that has been important to Gurira in everything she does. Her first play, In the Continuum, won her an Obie Award in 2006 for its searing look at two women — one African-American, one Zimbabwean — and how they deal with HIV.
A later work, Eclipsed (2009), studied four women whose lives became entwined with that of a rebel commander during Liberia’s civil war.
“It’s very strange, but when I started doing research on The Walking Dead, I found the stories very much like those of the women in war I had researched in Eclipsed,” Gurira muses.
Familiar is Gurira in a different vein, with an almost lighthearted story of the daughter of two Zimbabwean-American academics (or “Zamerican,” as Gurira puts it) whose daughter returns to their Minneapolis home, and announces that her wedding and everything connected with it will reflect her African heritage, to the partial dismay of her parents.
“I’m not trying to make any kind of a statement,” insists Gurira. “I was just looking to reflect something I know about a people and a community.”
Her biography testifies to that knowledge.
Gurira, 36, was born in 1978 in Grinnell, Iowa, to “Zamerican” academic parents, the youngest of four children.
When she was 5, after Zimbabwe gained independence, her parents decided to relocate the whole family there.
Gurira doesn’t recall it being much of a jolt because “I was only 5. I remember the plane ride over. I was a kid. What did I know?
“But I did feel like I belonged there very quickly, except for my twangy American accent. We lived on the university grounds, which were beautiful, and I was playing around with kids from every part of the world. It was a healthy and very enjoyable childhood.”Advertisement

In the eighth grade, one of her teachers, Robert McLaren, brought her into his children’s performing arts workshop, which she instantly loved.
“But we weren’t just kids doing shows,” she recalls. “We were taught that theatre is a disciplined art form that requires commitment. We created our own pieces, based on contemporary issues.”
Returning to America
After high school, she went back to the States for her education at Macalester College in Minnesota, because “I just did what everyone else in my family had done. I was going to the States for university.”
On returning to America, she admits to having “a slight culture shock. I realized this was a country I had to watch myself in.”
She doesn’t feel that she was the particular brunt of racist feelings because “every person of colour runs into something. You can’t avoid it. America is such a beautiful land of contradictions, but I’ve experienced more moments of harmony than of hatred.”
When asked if she was left with any lasting impression from those days, she says, “I feel that institutions should work toward a more raceless perception of how they should function.”
Although she had studied psychology as an undergraduate, she went for her masters in acting at the prestigious Tisch School of the Arts at New York University, where her playwriting also began to flourish.
After her award-winning debut as author and actor with In the Continuum, she landed a series of film and TV roles (including a season on HBO’s Treme) and made her Broadway debut in Joe Turner’s Come and Gone by the late August Wilson.
And then, out of the blue, came the call to audition for The Walking Dead, then in its second season.
To some people, it might seem like a frivolous choice for such a high-minded artist but, like many of the show’s cast, Gurira instantly saw and appreciated the more serious underpinnings of the program.
Frivolous choice?

“When I watched it, I was immediately interested in how beautifully it was being done, how powerful the writing was, how beautifully the artists on the screen were working.”
And as Andrew Lincoln (who plays Rick) has said before her, “It reminded me of an adult version of Lord of the Flies, a world of gone crazy, brought back to their most basic, primal savage instincts.”
She also discovered, to her delight that “most of the guys in the cast were from the theatre. There was a beautiful agreement of collaboration and an egoless drive for excellence. It was totally devoid of BS. That’s how I like to work.”
From a silent figure of bloodthirsty anger, the character of Michonne has slowly developed over the seasons in many ways.
“I see her as a character who seeks communication but is afraid of it at the same time. That’s a challenging combination. She now interacts with a whole group of people; she’s let her heart back into her relationships.”
Some might worry this openness would diminish the powers of the awesomely self-contained Michonne, but Gurira disagrees.
“Vulnerability never makes you weak. Quite the opposite. It brings you inner strength.”
While she finds every minute of her work on the show “rewarding and challenging,” there are two sequences she recalls with special clarity.
“In Season 4, there was that scene where I see my doppelgänger zombie, it makes something snap inside me and I kill all those zombies in the field. The release it provoked was very enjoyable to me as an actor.
“I was only supposed to kill eight of the zombies, but the director told me let it go where it wanted to take me and I killed all 24. It was visceral and unexpected, but an amazing rush.”
Then she laughs ruefully. “The only trouble is that I had to reshoot that sequence 16 times. It was very alive on every take, but I couldn’t move the next day.”
The other memorable sequence to Gurira was the scene where Beth (Emily Kinney) asked Michonne to hold baby Judith, Rick’s daughter.
“She handed me the baby, I held her in my arms and then I just cracked. Everything came pouring out of me. And I let it happen.”
FIVE FAVE AUTHORS
August Wilson: I was privileged to make my Broadway debut in his Joe Turner’s Come and Gone. The man just knew so much about humanity.
Anton Chekhov: His plays are what I think every author dreams of writing. Funny, sad, full of the contradictions of life.
Leymah Gbowee: Her autobiography, Mighty Be Our Powers, always inspires me. So much pain and hardship, yet so much hope.
Chimamanda Ngozi Adichie: I find her novel, Half of a Yellow Sun, a book that stays alive in my heart.
The Bible: Because everything is in it. Everything.