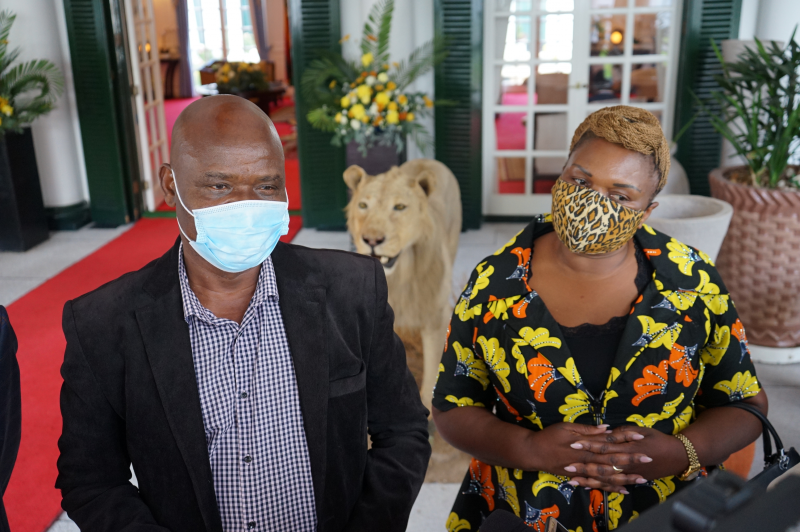 Timveous was last year recalled from Parliament after the now MDC-T Douglas Mwonzora said she was no longer a member of that party.

Parliament has since ordered her and scores of other recalled MDC Alliance MPs to return the high-end vehicles or buy them at the current market rate prices.

However, according to Hwende, First Lady Auxillia Mnangagwa promised to assist Timveous retain her parliamentary vehicle if she dumped the MDC Alliance and joined Zanu PF.

“Three weeks ago, we received a resignation letter from Mrs. Timveous which we accepted,” Hwende said.

“Her major reason was that Mai Mnangagwa had promised to help her retain the vehicle she received when she was a senator. Mr (Blessing) Chebundo has joined Zanu PF from the Mwonzora group. Political party membership is voluntary, we would to like to thank them for the time we worked together.”

However, Timveous shot back at Hwende saying she decided to dump the opposition party after careful consideration and concluded the MDC Alliance had nothing to offer the electorate.

“The party has been at the forefront of criticising Zanu PF and ZEC for allegedly failing to conduct credible elections, yet MDC internal elections have always been marred with a lot of irregularities,” she said.

ZEC is the Zimbabwe Electoral Commission.

“Vote rigging and buying as well as the imposition of candidates have become synonymous with MDC internal elections. The chaotic MDC Alliance and MDC-T elective congresses quickly comes to mind.

“The MDC senior leadership’s intolerance to divergent views and power-hungry tendencies have caused serious divisions and disintegration of the party. Similarly, the party’s retrogressive confrontational approach and violent tendencies have led to the unnecessary destruction of property, injury to innocent civilians and destabilisation of the economy.

“The party shuns engaging local stakeholders and fellow Zimbabweans in general, yet these have the interests of the country at heart.”

Former President Emmerson Mnangagwa’s political nemesis turned comrade-in-arms, Chebundo said his decision to defect from the MDC and join Zanu PF was a personal decision motivated by the need to support the government.

“It is with regret that I have to advise colleagues that I have decided to take a move on and  directly support government’s efforts, in any possible way, to develop the country, going forward,” he told NewZimbabwe.com.

“Obviously within any governmental set up, the move entails that I will be working with, and within the party running the government. Suffice to stress that this is a personal motivated decision with much interest to utilise my experiences acquired over long period within policy development and related work processes,” Chebundo said.

Chebundo and Timveous and were welcomed to Zanu PF by Mnangagwa and Vice President Constantino Chiwenga at the State House in Harare Wednesday.

“We welcome them to the Midlands province. It is a good development which only unite and cement us as a people with one Vision 2030 goal. It’s been a long road but we have come to this milestone where we welcome these two opposition luminaries,” Ncube said.

Meanwhile, the MDC Alliance Midlands provincial executive said it welcomed the decision by Timveous and Chebundo to join the ruling party Zanu PF, adding their departure will create leadership opportunities for other capable cadres.

“The MDC Alliance has never been in short of leaders. Their departure would open new opportunities to other leaders with worthy leadership salt. History will tell whether their decision is wise or folly. We wish them well in their new course but their political inconsistency may affect them in their political careers,” said Takavafira Zhou, the MDC Alliance Midlands provincial spokesperson.