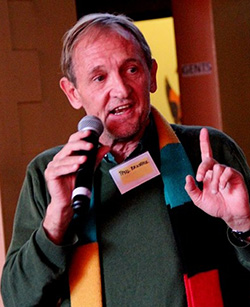 LIBERATION war veteran Paul Brickhill, one of Zimbabwe’s prominent arts entrepreneurs and founder of the Book Cafe, has died. He was 56.
Brickhill, a renowned jazz musician, succumbed to throat cancer Friday in South Africa where he was undergoing treatment.
He had been in and out of hospital and, in July, was admitted into the intensive care unit after he was diagnosed with thyroid cancer.
Brickhill was born in 1958 and grew up in Harare during the period in which the liberation war was intensifying rapidly. He refused to serve in the Rhodesian army and escaped from the country to join the liberation struggle in 1976.
He joined ZAPU in exile and immediately volunteered to serve in ZIPRA, in whose ranks his elder brother, Jeremy, was already serving. During his service in ZIPRA intelligence he undertook many dangerous undercover operations and was a fearless revolutionary cadre.
Following independence in 1980 he began his life-long career promoting culture in Zimbabwe, founding the country’s first progressive bookshop – Grassroots Books – in 1981 and subsequently its associated sister publishing company, Anvil Press.
Together with his first wife, Pat Brickhill, he played a leading role in developing Zimbabwean publishing and bookselling. He was elected Chairperson of the Zimbabwe Book Publishers Association in 1991 and served on the Board of the Zimbabwean International Book Fair for the following ten years.
Working with colleagues in other African countries he co-founded the two major African publishing organisations – the African Publishers Network (APNET) and the Pan-African Booksellers Association.
At the same time, Paul pursued his own personal journey as a musician, establishing a series of bands during the 1980’s, including the popular Solidarity Band, which featured several young musicians who were destined to find fame as the Bhundu Boys.
Paul’s saxophone travelled across the whole country in those years, most usually to be found in the poorer working class township pubs and clubs. In later years he and legendary jazz guitarist David Ndoro founded Luck Street Blues, playing almost 1000 live shows in the years 1995-2005.
With his brother Jeremy, Paul also played an important role during these years supporting ANC and Umkhonto we Sizwe operations launched from Zimbabwe, hosting ANC cadres and providing logistical support to the South African liberation struggle.Advertisement

Their activities led to the car bomb attack on Jeremy Brickhill by apartheid agents in 1987. Apartheid agents later confessed that they had been confused by the identities and tactics of the two brothers and were not sure which one to attack first.
In 1997 Paul expanded the original Grassroots Books concept into a multi-dimensional artistic vision involving music, theatre, film, literature, poetry, art and craft and thus was born the world famous Book Café.
Since then the Book Café has nurtured and promoted music and the arts under Paul Brickhill’s inspired leadership.
Together with its sister organisation, Pamberi Trust, the Book Café has hosted over ten thousand shows and events, launched dozens of new artists, promoted Zimbabwean and African music, literature and poetry, provided a venue for topical and political dialogue and become a much loved and iconic beacon of artistic freedom and excellence.
In 2011 Paul Brickhill received a NAMA Award for “services to the arts” and in 2012 he was awarded a Prince Klaus Award by the Government of the Netherlands in recognition of his role in establishing the Book Café and his own life-long commitment to promoting the arts.
Just last week he received the Artwatch Africa Lifetime Achievement Award on the opening night of the Shoko Festival in Harare.
Paul is survived by his brother, fellow war veteran Jeremy Brickhill, his first wife Pat and his second wife Jennifer, and his four children Tomas, Liam, Amy and Declan.
Mourners are gathered at 6 Durban Road, Avondale, Harare. Funeral arrangements have yet to be finalised.