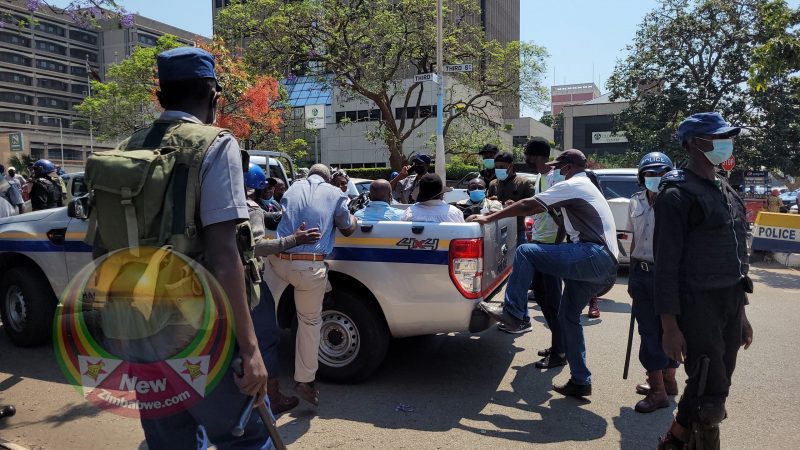 WAR Veterans came out guns blazing against President Emmerson Mnangagwa, dismissing his “sanctions” mantra, giving examples of how his children were getting fatter by the day while theirs starved.

They also expressly said they were not afraid to die for their cause.

Having had their demonstration dramatically halted by anti-riot officers who sealed off Africa Unity Square which had been publicised as the meeting point, War Veterans told journalists they regretted having gone to war.

They had attempted to congregate and march to Mnangagwa’s Munhumutapa office where they wanted to hand over a petition detailing their grievances.

They were bundled into police trucks and taken to Harare Central where Zimbabwe Lawyers for Human Rights (ZLHR) stepped in to assist.

“We thought it was a noble cause, such that everyone would come back home and there would be plenty but we are suffering we are hungry,” said Zila Mutasa, a former freedom fighter from Mabvuku.

It is US$164 at the official rate of US$1: $97 but getting the much favoured US dollars at that rate is impossible as the Reserve Bank of Zimbabwe’s (RBZ) US$50 facility has also been infested by crooks at various Bureau De Changes.

Mnangagwa’s children Collins and Emmerson Jnr are some of the many offspring of the high and mighty whose wealth has astonishingly continued to grow.

Some of them do not hesitate to flash it out for the poor to marvel at.

Their situation, poor, starving and jobless has been blamed on sanctions by Mnangagwa since a year ago and Zanu PF over the past two decades.

A similar protest and similar treatment of war veterans was a tell-tale sign of factional fights within the ruling Zanu PF that eventually resulted in late President Robert Mugabe being showed the way out by armed battalions of soldiers.