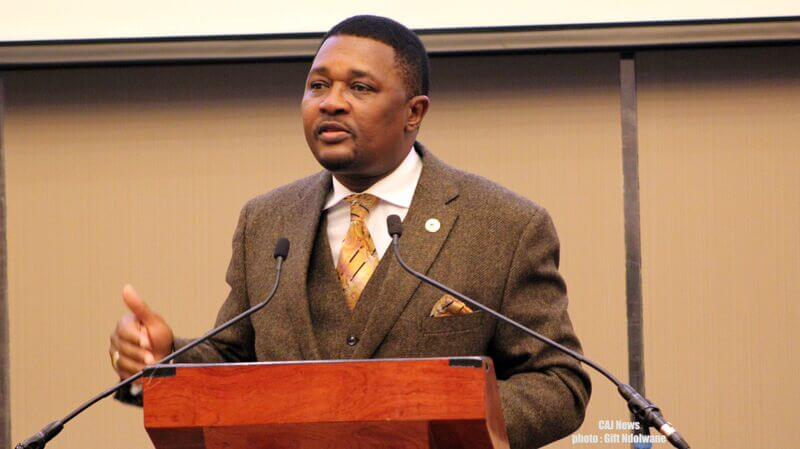 FORMER Tourism Minister, Walter Mzembi (54) has been slapped with a warrant of arrest after he failed to turn up again for his trial on Monday with his lawyer saying he was “critically ill”.

According to his lawyer, Job Sikhala, the embattled ex-minister is currently hospitalised in South Africa.

On Monday, Mzembi’s trial failed to commence for the third time and was moved to December 4 by Harare magistrate Hosea Mujaya.

Last week, his lawyer told a different magistrate, Gloria Takundwa that his client was seriously ill but did not disclose his ailment.

However, Mzembi recently said that he was suffering from a stomach cancer and has since been operated on.

He successfully applied for his passport to be handed back to him while indicating that he would need the traveling document for a lengthy period since he is going through some post-operative reviews.

The former minister was supposed to appear for trial on November 19, 26 and 29 but the trial was moved to allow him to recuperate.

In May this year, court issued an administrative warrant after his lawyer Sikhala confirmed in court that Mzembi was confined to his bed in the intensive care unit at a private hospital in Cape Town, where he was restricted from moving or travelling as his condition was serious.

He is answering to $1,6 million theft charges after he allegedly squandered money which was meant for United Nations World Tourism Organisation (UNWTO) when he was tourism minister 2013.

Mzembi is being charged together with Tourism and Hospitality ministry consultant Aaron Dzingira Mushoriwa (62) and the ex-permanent secretary Margaret Sangarwe (59).

It is alleged that Mbada Diamonds pledged to sponsor $2, 5 million when they were approached and a bank account was supposed to be opened to receive the funds.

Court heard that Mzembi then instructed Mushoriwa and Kahudzayi to open a bank account in the name of an unregistered company, Conventions Africa, with ZB bank.

Mushoriwa and Kahudzayi were signatories to the ZB bank account, it was further alleged.

Court further heard that between September 2012 and August 2013, Mbada Diamonds made several deposits amounting to a total $810 000 into the ZB bank account.

After receiving the funds, Mushoriwa connived with Kahudzayi and transferred $150 000 to Croco Motors for the purchase of three Ford Ranger Double Cabs and registered them in the name of UNWTO Trust which was non-existent.

Court also heard that Mushoriwa and Kahudzayi also received a Tata Xenon Double Cab that was fully paid for by Mimosa Mining at $33 626.

According to State papers, Mzembi then gave orders for the motor vehicles to be distributed and he got a Ford Ranger, Mushoriwa obtained a Tata Xenon Double Cab, while Sangarwe and Kahudzai each got Ford Rangers.

After the UNWTO meeting, court was further told, the accused persons connived and failed to surrender the cars to the ministry but converted them to personal use.