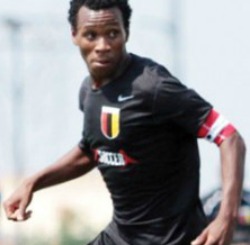 FORMER Highlanders defender Teenage Hadebe has made the grade at South African Premiership giants Kaizer Chiefs and talks for a possible transfer have already begun with his club Chicken Inn.
Hadebe returned from South Africa at the weekend as negotiations for his transfer go on. Reports from South Africa indicate that Kaizer Chiefs coach Steve Komphela has seen glimpses of what he likes in a central defender in the towering Hadebe after the trial period and is keen on singing the Zimbabwean.
Hadebe is a left-footed central defender who uses his height to great effect on set-pieces. With Kaizer Chiefs first choice centre-back Erick Mathoho currently injured, Chiefs’ options in that position have been trimmed down to Daniel Cardoso, Lorenzo Gordinho, Ramahlwe Mphahlele and the transfer-listed Siyanda Xulu.
Chiefs have so far registered three foreign players in Lewis Macha, Mitchell Katsvairo and Edmore Chirambadare and still have two spaces open in their quota of five, but one is reserved for injured Togolese forward Camaldine Abraw.
The lanky defender has also been called to the Warriors squad for a Group L 2017 African Cup of Nations qualifier away to Guinea next month to take the place of injured Elisha Muroiwa.
Muroiwa, who partners Czech Republic based defender Costa Nhamoinesu at the heart of the Warriors defence, sustained an injury during the Cosafa tournament in Namibia in May. Since then, he has not played for his club, Dynamos. Although he is training with the Glamour Boys, Muroiwa is yet to get back to a desired fitness level.
And Warriors coach Kalisto Pasuwa is expected to give Hadebe the nod at the centre of defence ahead of Lawrence Mhlanga.
The 20 year old Hadebe, a member of the Chan and Cosafa squad, made the final 18 when Zimbabwe thrashed Malawi three -0 in June in Harare to secure qualification to the biennial soccer show case to be staged in Gabon in January.
He had impressed Pasuwa after scoring a brace with headed goals as a make-shift Warriors overcame a battling Uganda 2-0 in an international friendly at Rufaro, just three days before the clash against the Flames of Malawi.Advertisement